Kiz Kulesi and other tales

Ramo came to town. Or Ramazan, as he is called here in the land of his birth. He is as Canadian as they come but he is also from here. Call him whatever. He is a citizen of the world. He travels at the speed of light.
And he’s a natural born story teller. 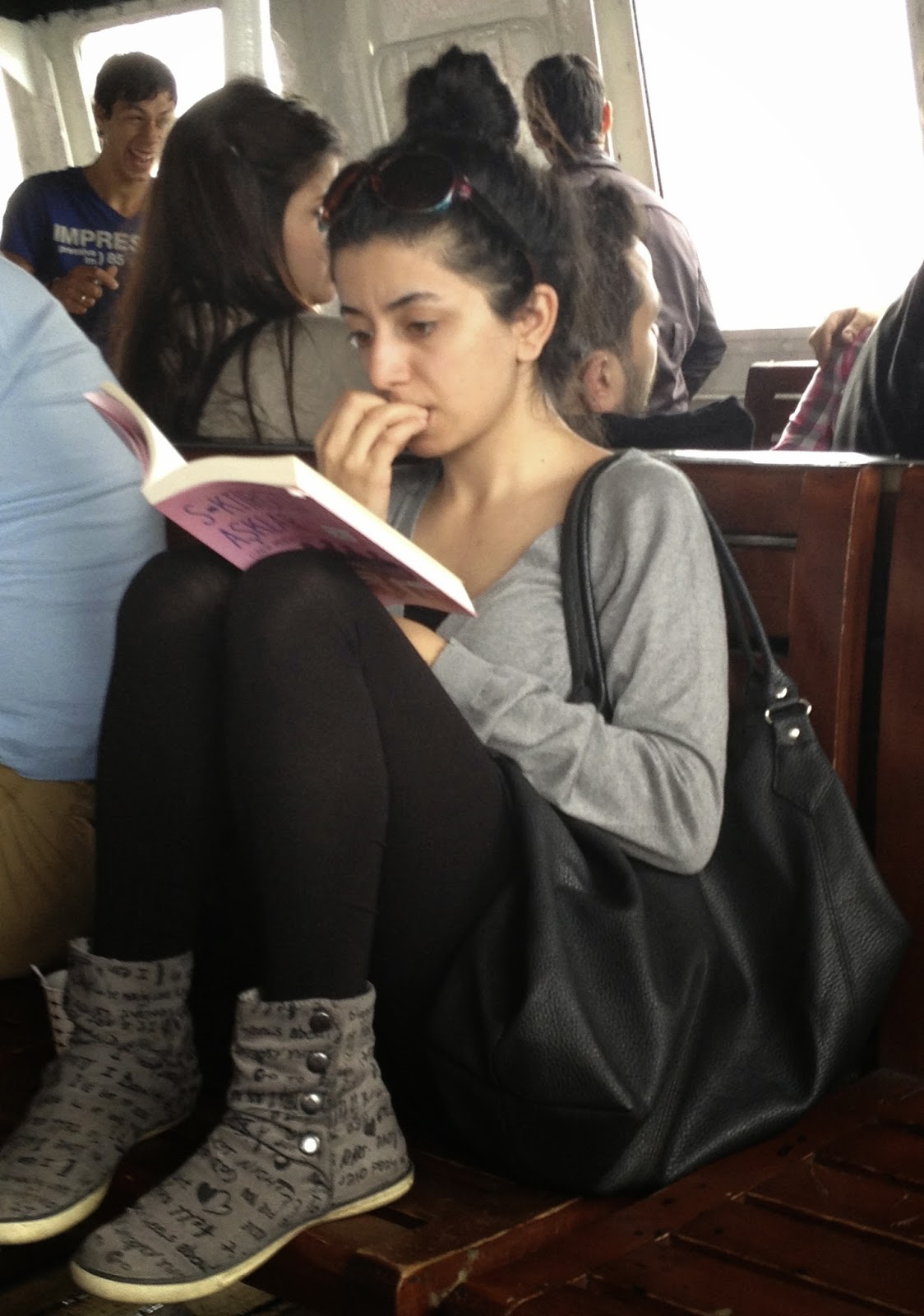 Five minutes into the visit, we are in Kazakstan, where he managed with his knowledge of Turkish in many places. He even found an Ankara kebab place in one of the cities he visited. There he was told that the way the customs people had treated him at the airport was troublesome. They took his toothbrush and said it looked like a knife. He figured they wanted him to grease their palms but then some other people came and they let him go.
“The man at the kebab place told me they might have wanted to slip drugs into my luggage,” he tells us. “You never know.”
All the while he is telling his story, he is smiling. The world is his playing field. A Zen master, just taking life as it comes, he feels at home in any skin. Before I have fully absorbed the Kazakstan story, we are in the Grand Canyon, running with him. It is a thing. People run from one end of the bowl to the other. Five hours of it through 36 degrees Celsius. Five hours of it, he alone because it was the middle of the week. He managed to avoid scorpions and rattlesnakes as he went.
The angels watch over him.
For lunch we meet with our Guelph friends and the talk drifts from daring feats to the need to sell the house. I get an update on the cats. The plan is still to put pictures of the kittens at the local pet store. But the grown-up cats? 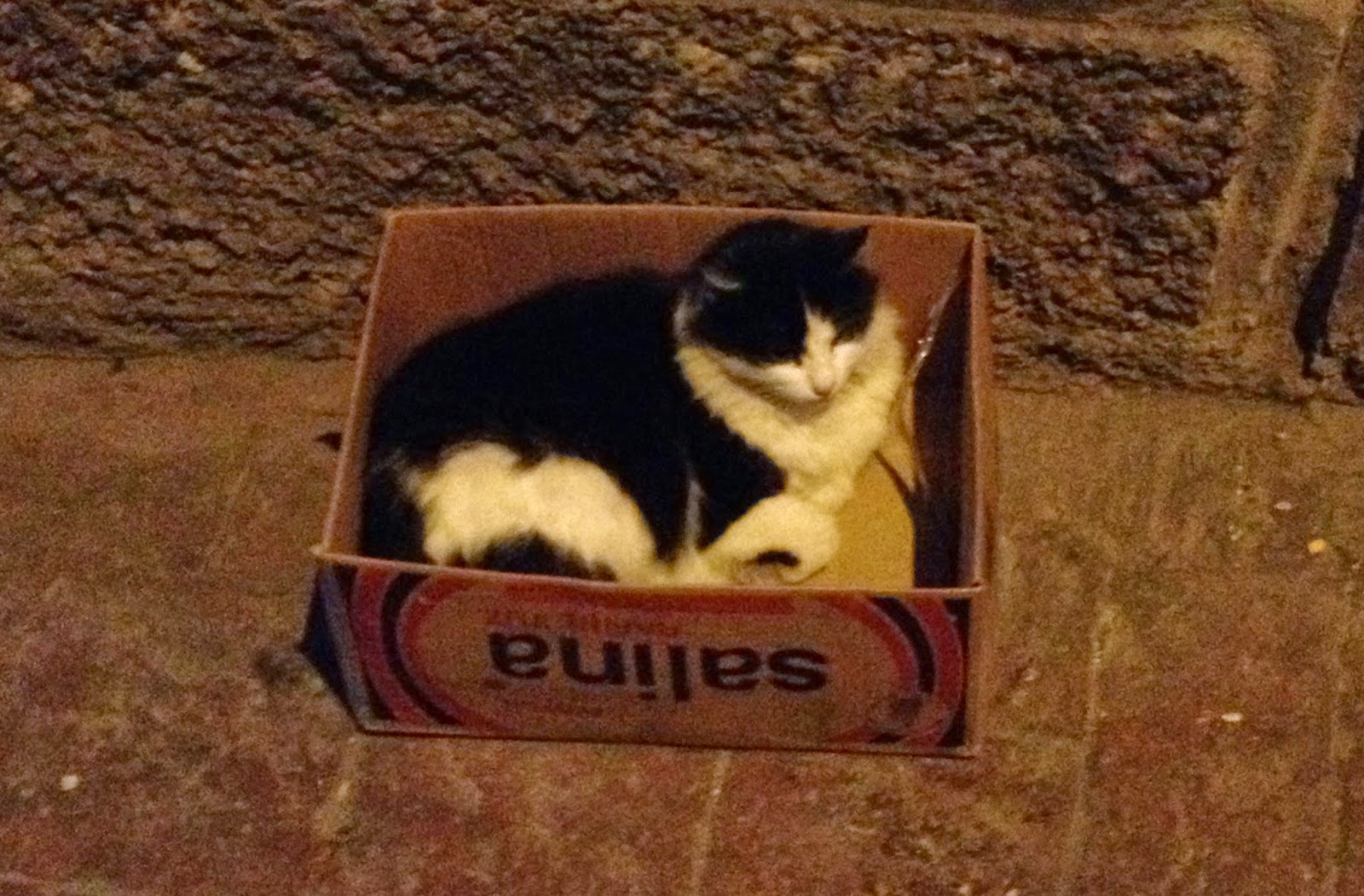 Then she asks me what I know about transporting pets by plane. Her expressive face shows the horror of my concerns. “But,” I hasten to add, “Sometimes you just have to do it. Lots of people do it, and say their pets are fine.”
“I could take the Queen Mary across,” she says.
She then leans in to hear about a scheme to make the best out of the sale. When she looks at me, I can see the wheels turning. Maybe taking her menage across the ocean on the Queen Mary might be affordable?
Since our last talk about her cats and dog, I have come to appreciate the relationship Turks have with their feral animals. They adore them and do not want them euthanized.
You will sit somewhere having coffee. A dog, lying in the middle of the path, will roll over and invite petting. Many stop and take the time to ruffle him. Most will not,but everyone just lets them be.

A while later I spot the dog scratching away vigorously at a flea.
The feral cats are usually not that friendly, but they look contented because people feed them. They’ll come close but don’t want to be touched. At the cafeteria of the Sultan’s Palace they run whenever they hear a bag with food open. 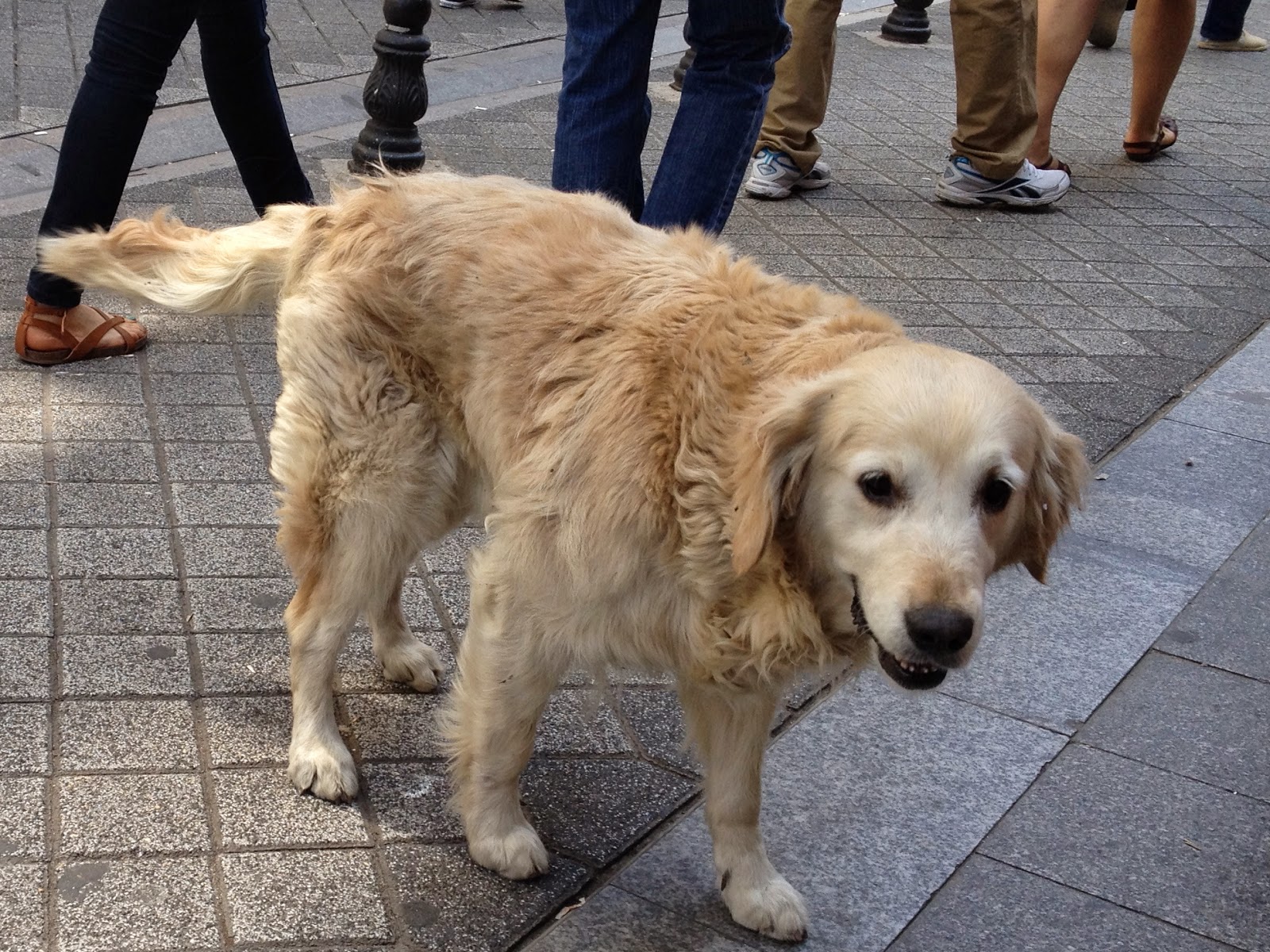 Most dogs you will find splayed on the sidewalk, their enormous bulk taking up a good space, have tags in their ears. Since Turks do not want them euthanized, the authorities take the dogs to shelters where they are spayed and given the needed medicine. Then they are put back on the street. As wonderful as this is, there still are problems with those dogs that do not get picked up and contract rabies. They bite people. And there still is a problem with owners, who will release their pets to the streets because now they are no longer the cute creatures they were at first.
As wonderful as the life of many of these animals can be, I  see my friend’s concern.
Maybe the Queen Mary it’ll be.

Before we met with our friends for lunch, we had time on our hands and ambled down the promenade. We were just talking and sharing when Ege called our attention to the fact that we overshot our target, the restaurant where they were waiting for us.

“But we have time yet,” he said. “Let’s just walk a little further. There is something I want to show you.” 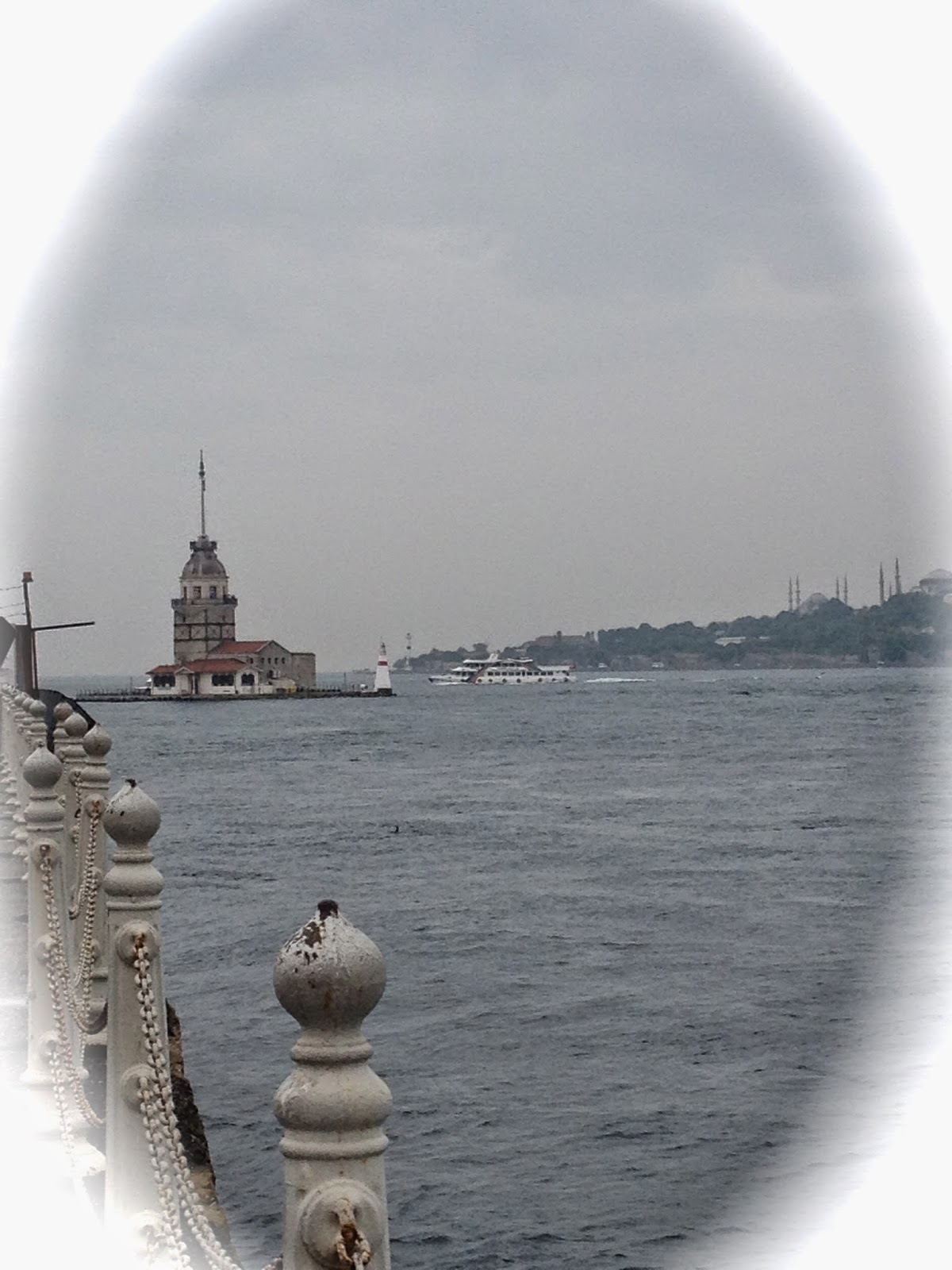 Kiz Kelesi. On an islet just big enough for this one building, and situated just two hundred meters into the sea. She had been haunting me for the last few days and there she was.
Like Ramazan, she has many stories in her long history.
Her beginnings are in ancient times when she was part of an Athenian defence system and a wall connected her to the land. The foundations of that wall lie buried in the sea now, along with many other things, as Orhan Pamuk tells us in one of his novels. In the twelfth century, a wooden tower was built and, as so often happens here with buildings, earthquakes and fire ravaged it until a stone structure was built in the 1700’s. For a while she was called Leander’s Tower when the Leander and Hero legend, which took place in the Dardanelles, attached itself to her. I learned with some satisfaction that I am not the only who gets confused by the configuration of seas and passages that connect the waters in this region.
“There,” Ege said. We had just rounded the bend. “The Virgin’s Tower.”
“In English it’s called the Maiden Tower,” I said.
Trust the English to play it safe. After all, with maidens you never know.
This maiden, though. I root for her. She was put in the tower by her father, the Emperor, because of a prophecy that would have her die at eighteen from an asp bite. For her eighteenth birthday, happy that the oracle did not come through, he brings her a basket of fruit and, well, the ending is predictably sad. You just hope life was good to her in those short years.
The Bosphorus holds many tales. 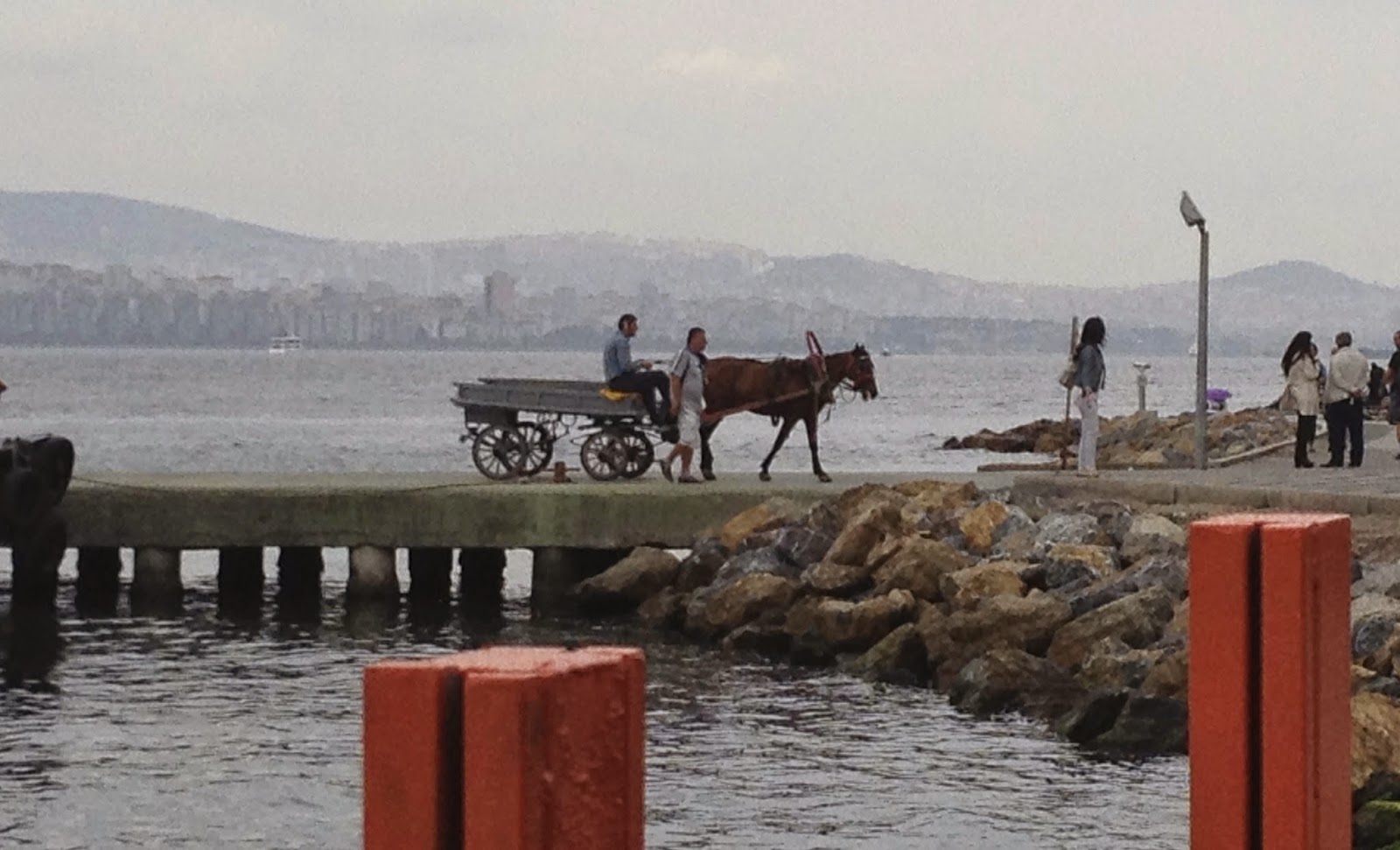 On Saturday, we took the ferry to the Prince Islands, so named by the Greeks during the Byzantine era. They, and later the Ottomans, used to send their unwanted rulers there, in exile. Today, they offer a welcome respite from the city they are part of. The only traffic allowed on the island are horse, ass, and people powered, apart from the ferries that bring us and official vehicles that keep the communities clean and safe.
The ferry is full of day tourists as the fare is only a few dollars, allowing families, couples, and outsiders like ourselves, an afternoon of leisure away from the bustle of the city. I see my first beaches. Nothing like the beaches on the Mediterranean but, at last, a place where people can swim. I look over the edge of the boat and see many pretty jelly fish. Maybe I won’t swim here. Later, on the Big Island, I will see young men leap from a tour boat into the sea. Presumably waiting for their clientele. They look happy as young men should be. 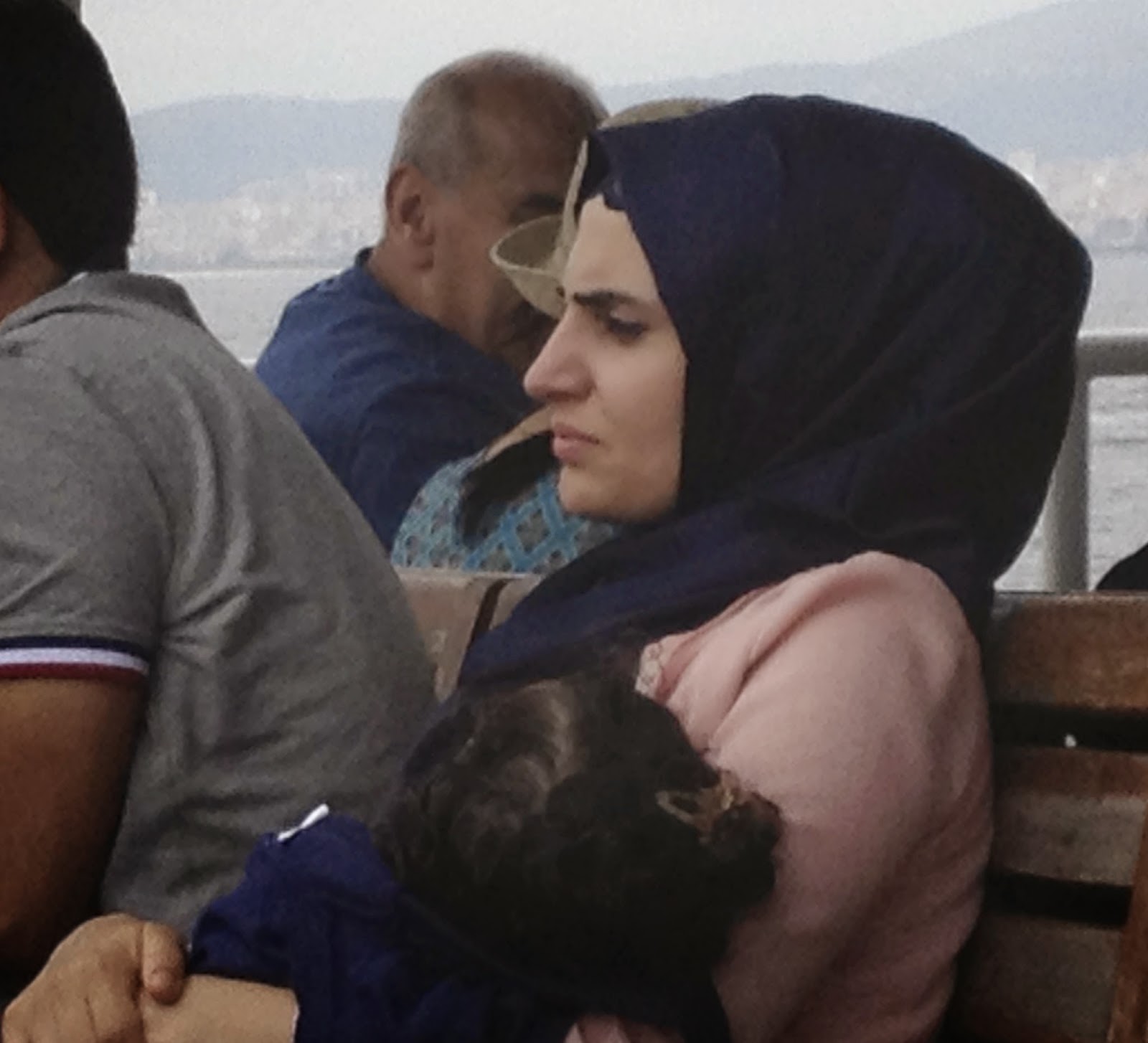 As we chug along, the city a glassy fata morgana on one side, the open sea on the other, I become a student of faces that are encased in all manner of dress. Inadvertently, I puzzle over the adherence by Eastern women to dress in a way that covers just about all of their body. Not just covers it; hides it. 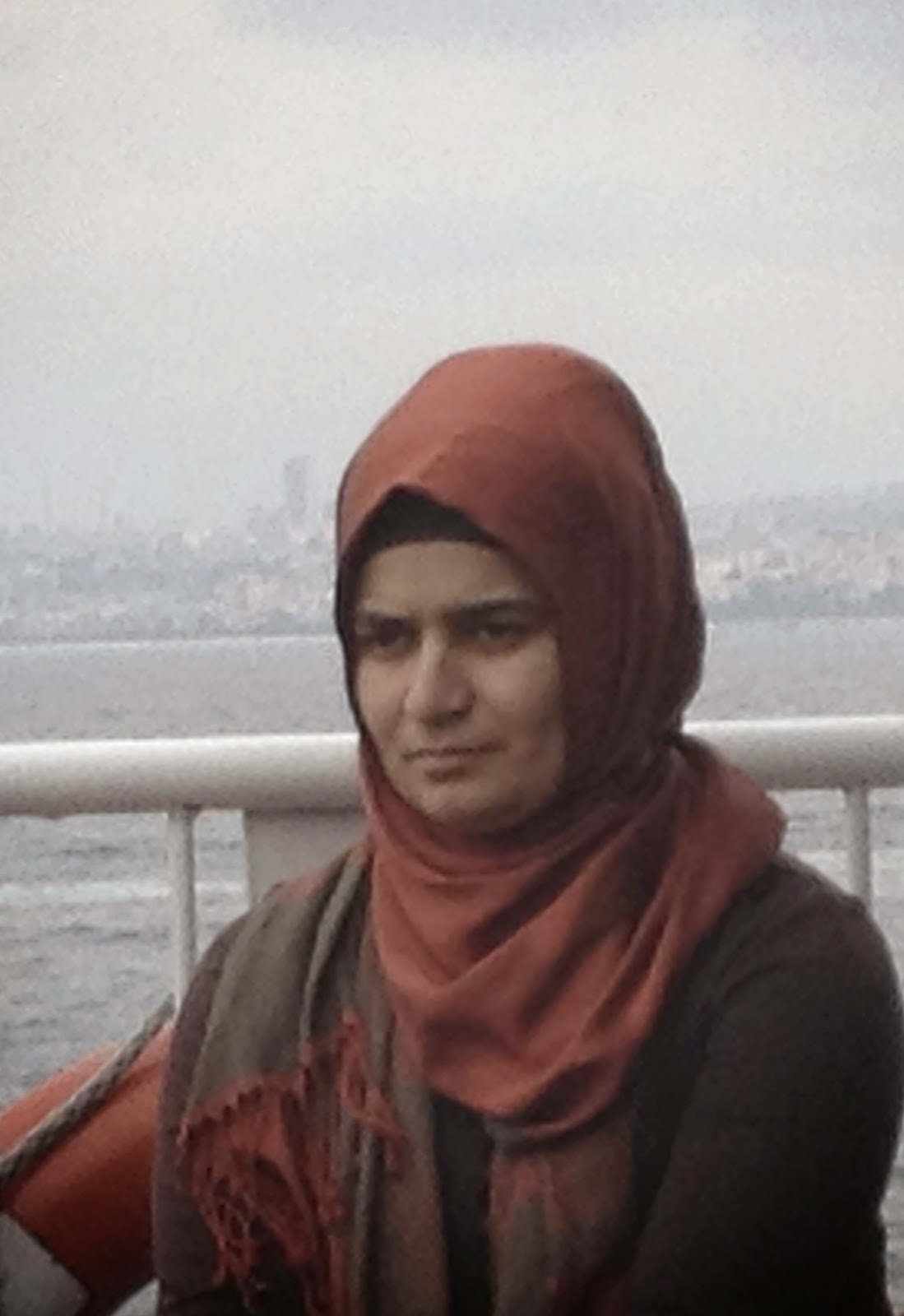 The ones that draw my curiosity the most are the women clothed in layers of black, and with only their eyes showing. I find myself trying to capture these eyes while questions dance in my head. When they have children, I sometimes manage to exchange a glimmer of a smile.
We share a moment of laughter at a coffee house when it starts to rain and Th attempts to open the canopy with the appropriate handle, but he hasn’t noticed the canopy is fastened. A group of women who share our canopy find this hilarious. Middle aged women, dressed from top to toe, their faces free. They are sharing plastic containers and bags full of mouth watering foods. 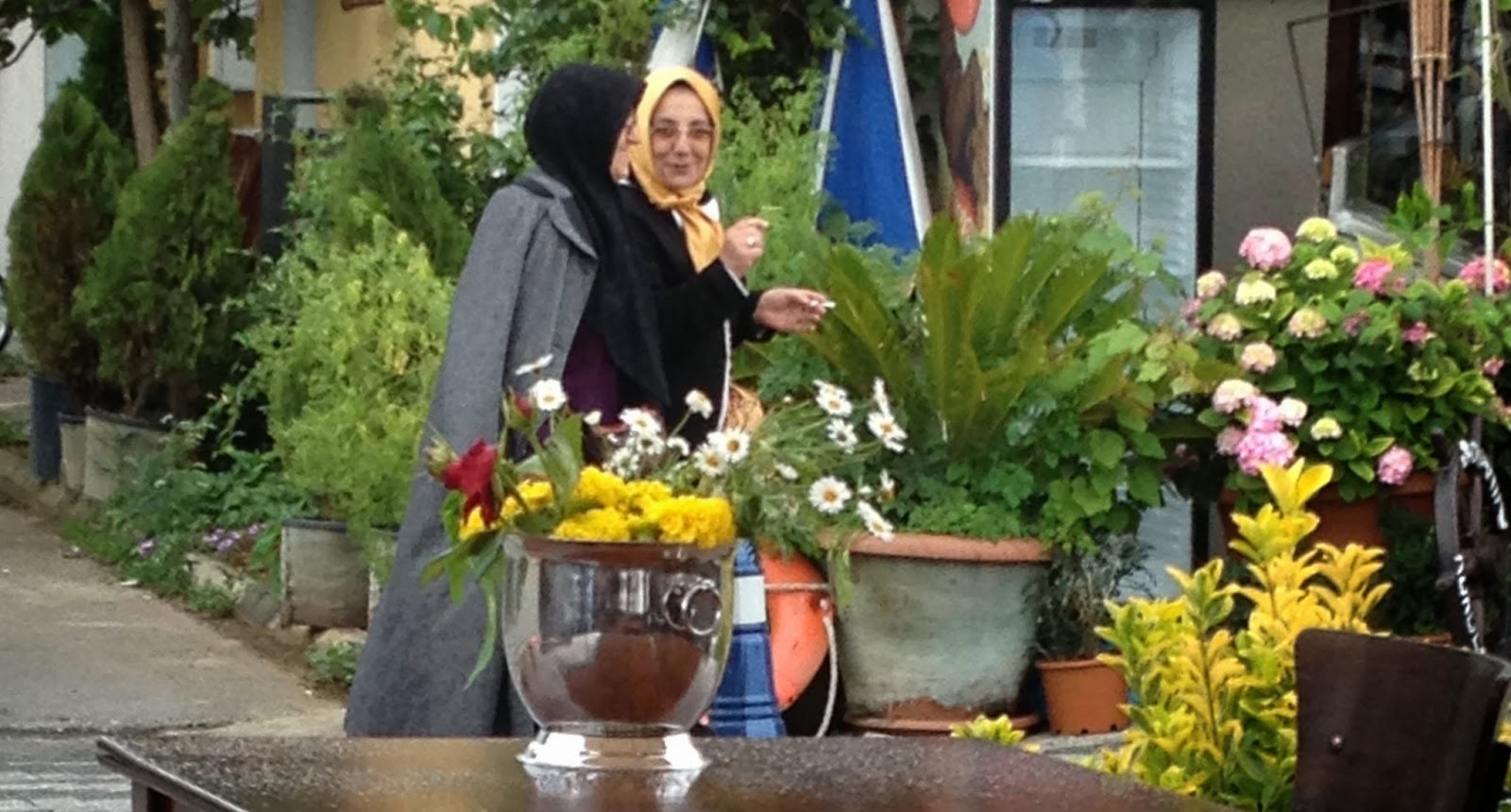 No kids, no men. Just them, out for a good time on a Sunday afternoon.
A wedding party walks by, the bride in a short cream coloured dress, with a fashionable décolletage. The groom handsome in a pale grey suit, a band in tow. Before City Hall they stop and the bride starts an exuberant dance to the frenzy of clarinet music and drums. When I look up I see  a row of women all in black flutter by like dark moths on a nearby quay. I think of their almond shaped eyes, some of them even with glasses, so nothing of their body is uncovered. I think of their breath, hot and damp, against the cover of their mouths. 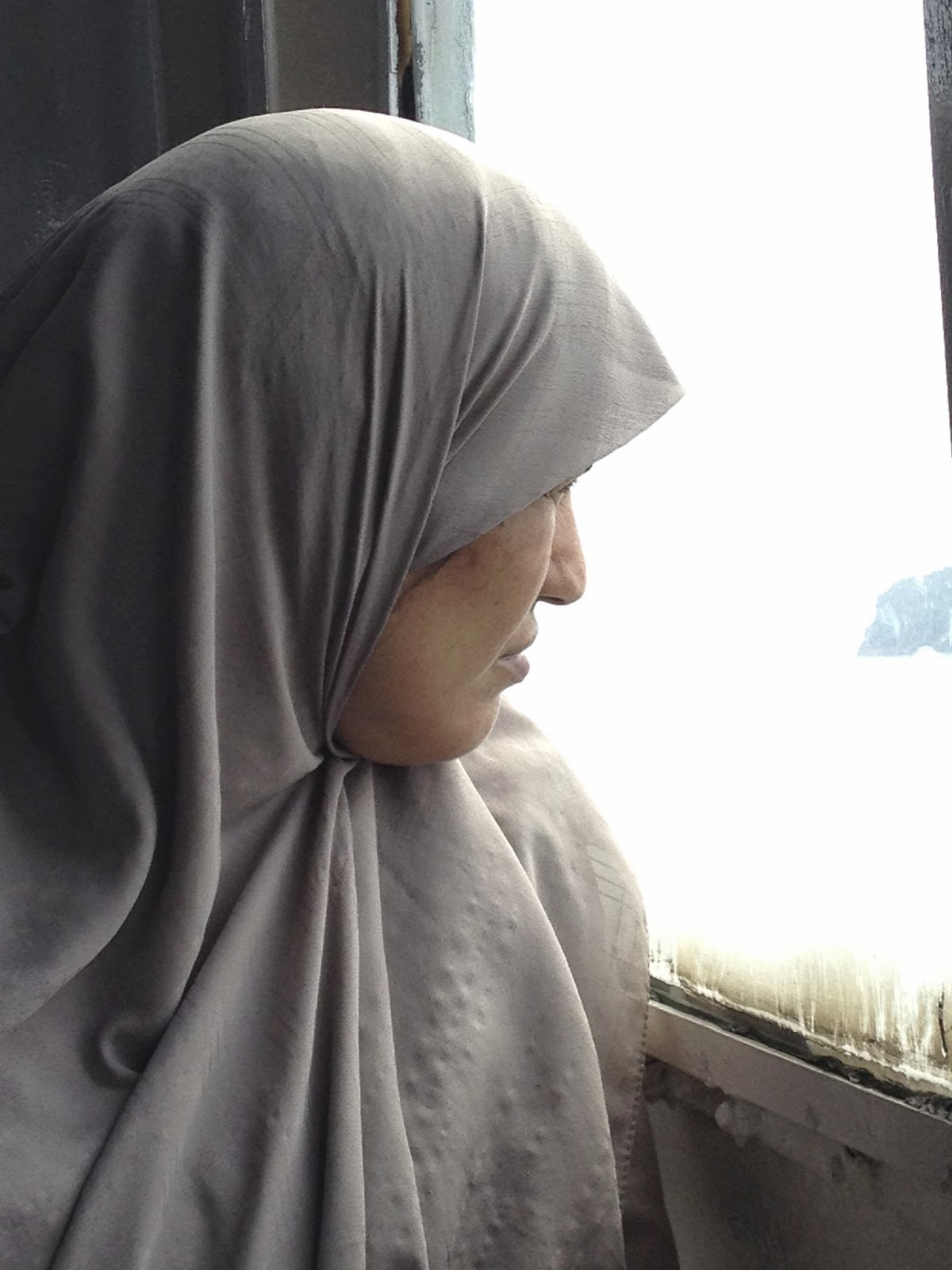 Later that night, we sit at our usual table at the Muhit Café, where Th sends clouds of smoke into the air. Around us the tables are filled with young men and women, in fashionable Western dress.  The waitress comes by when Th motions that he doesn’t have an ashtray. She asks for the name in English. A pleasant girl, a pretty girl, with a bob of frizzy blonde hair. She is wearing walking shorts and a shirt.
In Istanbul many cultures live side by side peacefully, day in, day out. I walk alone often and never feel the kind of disquiet I feel in other major cities where pickpockets abound. Street crime, here, is virtually non existent in most areas. We listen to reports of shootings in Belgium, Canada, and the US, and realize that dangers lurks everywhere. 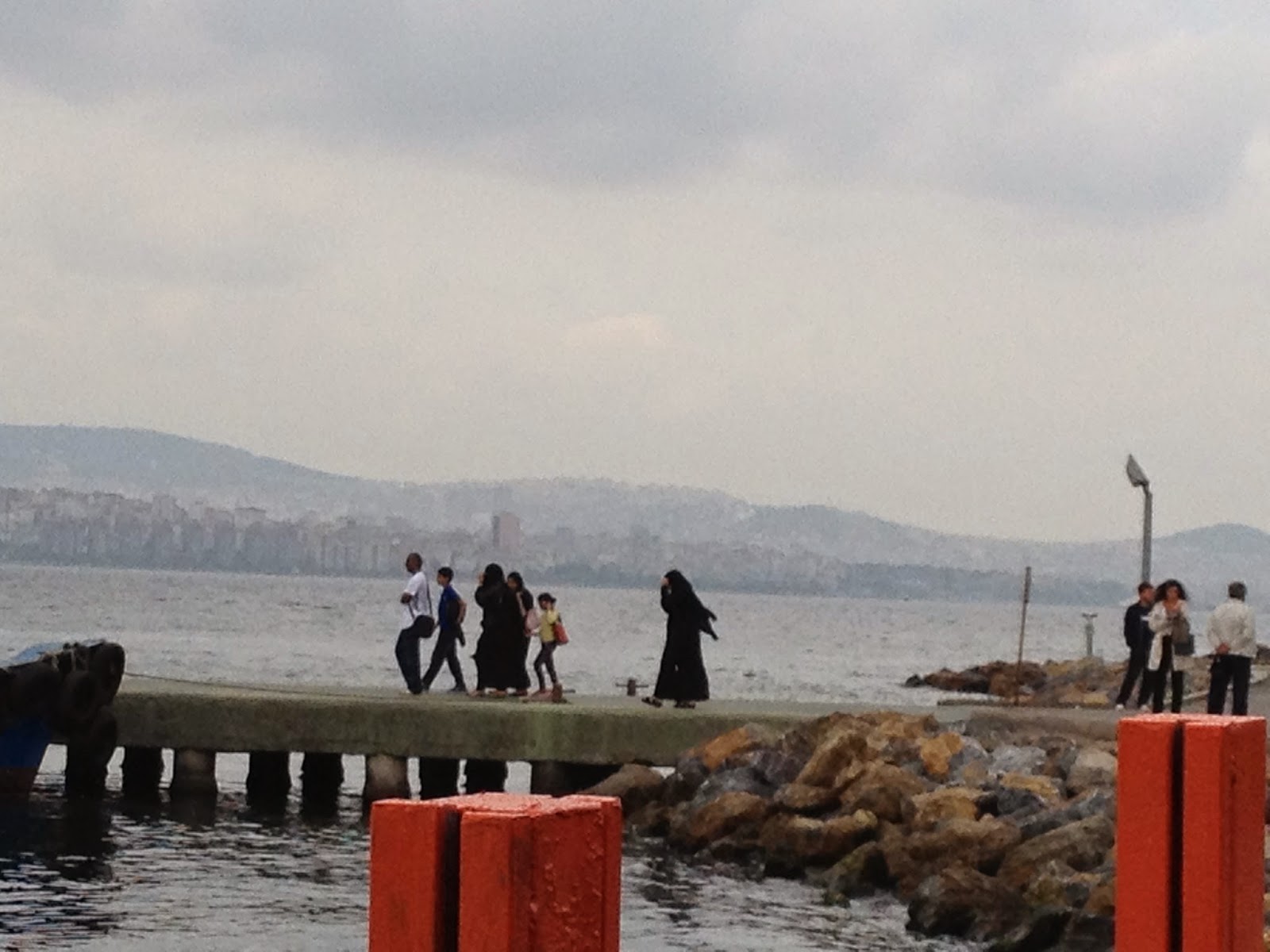