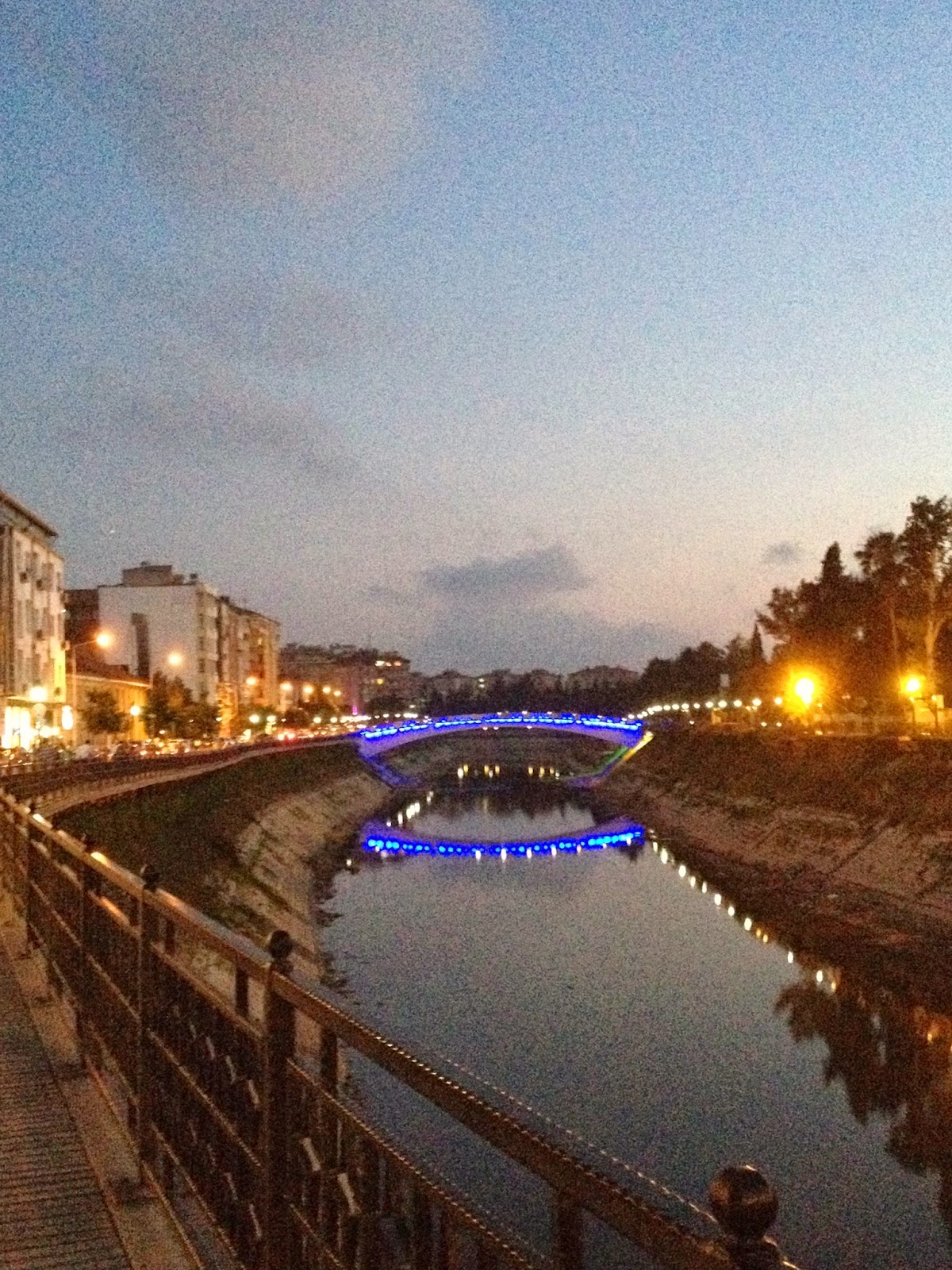 The evening of our last day at Antakya we went to the Antique Han. I don’t know how this restaurant rates with connoisseurs, but we were happy. The courtyard upstairs has the look of an old village, except that in the back a large television screen showed the current World Cup soccer match. The food was delicious, the service brought with joviality, and the match enjoyable, especially when you get to light a fragrant cigar.
The last morning we spent going by our favourite places. I ate five bites of künefe and declared it the best thing ever. We wandered to the park by the river where old pine trees carve paths by rows of outdoor coffee houses. Most have plastic chairs, some have the typical low benches covered with colourful cloth. Everywhere, people gathered to enjoy the shade. We walked by a family group. The women’s black robes draped over their knees as they sat on the ground, on spread blankets, getting lunch ready for their families. Other families brought hibachis that sent thick smoke into the air. A man was selling bundles of chickpea plants full of pods for shelling and popping in your mouth. I would later join to enjoy this refreshing and nourishing treat. 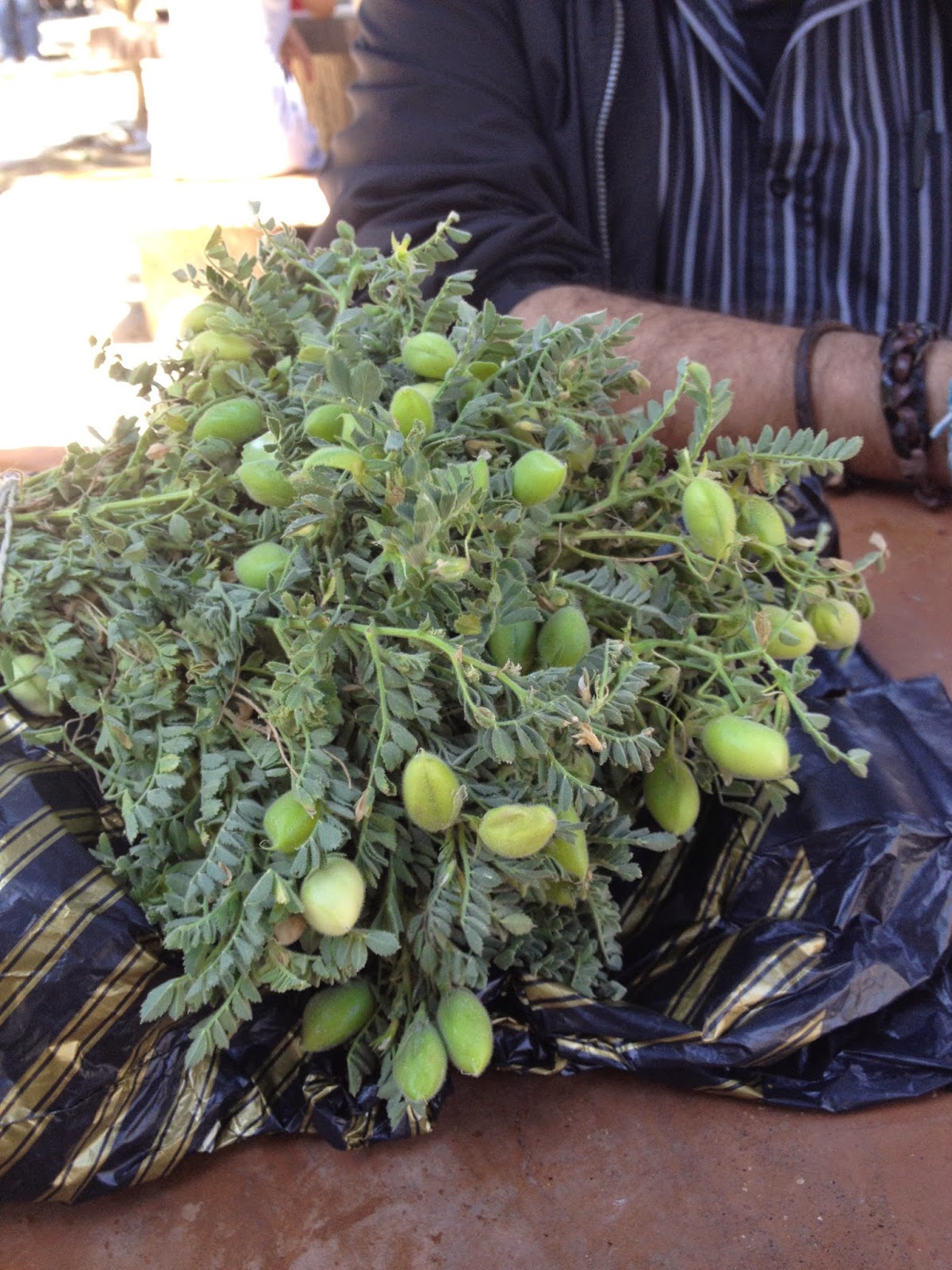 Draped robes over knees and chickpea pods. These images made me wonder if, in some ways, time has stood still here. When I saw two boys having fun throwing half empty water bottles at unsuspecting pigeons, their aims accurate and vicious, I knew it from looking at the pigeon. I could just see them thinking: not that again.
We stayed in the park until it was time to go back to the hotel for our appointed ride to the airport. Th and I looked at one another and realized we were entering the inevitable faze of a string of goodbyes. In a few weeks time our time in Turkey would be over. 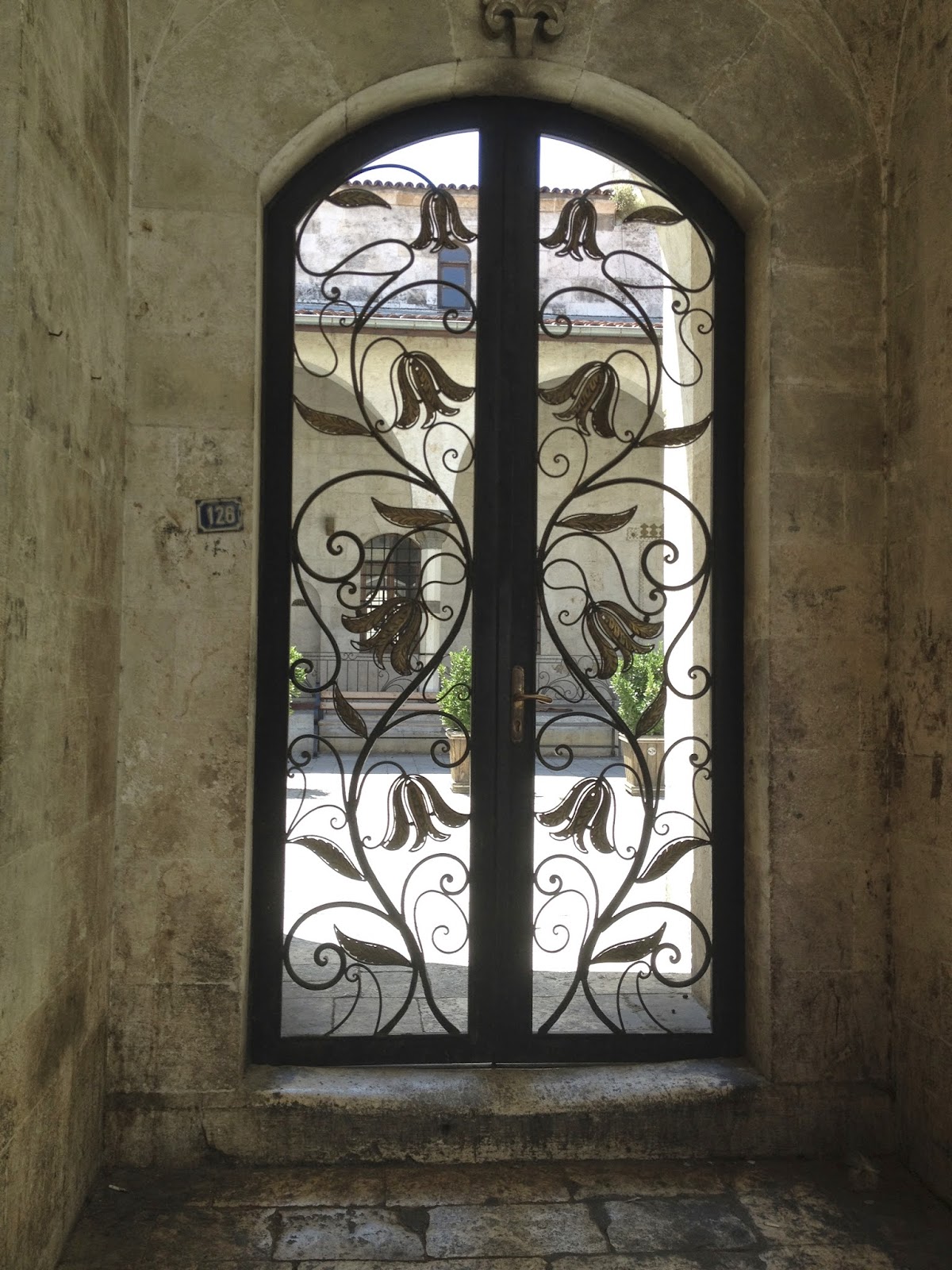 At the hotel, Leila wasn’t there. She was already gone on a day trip with a couple who came in yesterday. We had said our goodbyes and exchanged emails at the breakfast table.

“Next time you come,” she said, “my mother wants you over for coffee.”
On the way to the airport we were driven in her car by a young man, who pressed an eager foot on the gas pedal. I was looking again for evidence of refuges but couldn’t find any. The small space of the car filled with the heartrending sounds of a clarinet. It strung a rope around my deepest core and pulled it tight. The underscoring strings offered a soft caress. Then a voice the sound of tears took over the melody.
A sister’s last embrace telling me I don’t want to go. 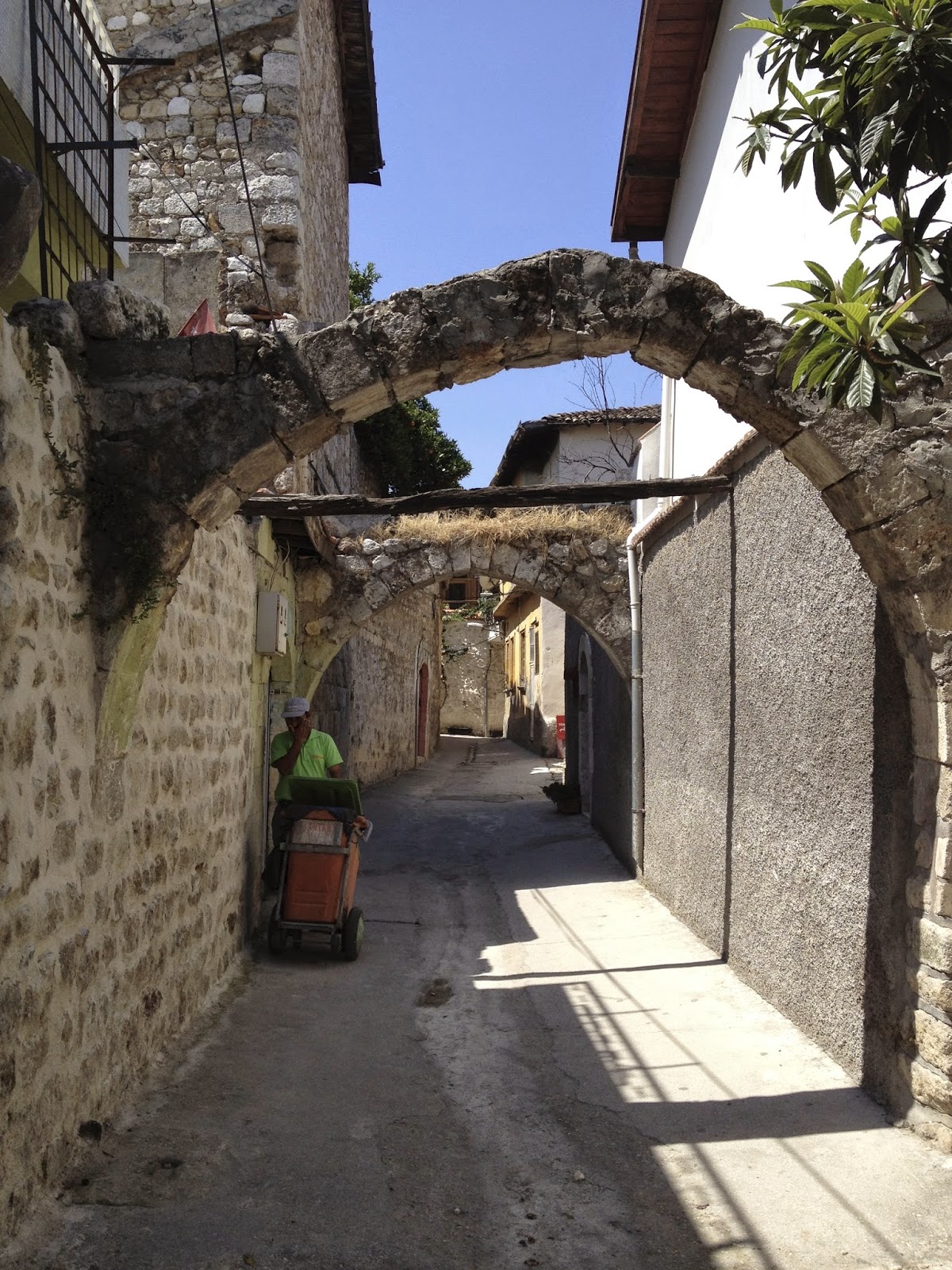 Just before we turned in to enter the airport, we came upon a herd of tan sheep, led by a donkey. Time stood still again but not for long because soon we were lining up to go through security. A young man waiting for someone turned to us and wished us a warm welcome. We were leaving but we didn’t mind this reminder of the kindness we encountered everywhere in this region. In the waiting lounge, that sits between the two parts of the building, sparrows chirped. At a table nearby a woman covered in black sat with another woman in Western clothing and two men. They were talking animatedly.
As we were lining up to board, a small child started crying because she had strayed away form her mother, her anne. A woman in uniform took her by the hand and spoke to her softly. “We’ll find your anne.” She interrupted this sing-song mantra with the occasional call out to the passengers. “Is this your child?”
Soon the child was reunited with the parents and fell, sobbing, into the arms of her anne. Time stood still again. The father was in one place, the mother at the other end of the aisle, both confident the child was with the other.
The rest of us, meanwhile, were given tags to identify our hand luggage. On the way here, people had brought whole suitcases into the aircraft cabin. One man even three big bags and a fourth one, just a large cloth holding stuff. The air attendants had been very graceful about it as they helped him stow things away.
At this end the one piece per passenger was in effect and a cheerful young man was in charge. “Where are you from?” he asked us. “Ah, Canada!” he said. He cheerfully helped us fastened the tags. When we boarded, ten minutes later, he pointed at us and said: Canada. Then he wished use a safe journey.
At the Atatürk airport of Istanbul we waited and waited for our luggage but Leo was there. I had clear forgotten about him but now he winked at me, his wrist confidently showing his watch.
“No problem, baby,” he said. “I’m here and, by the way, welcome back.” 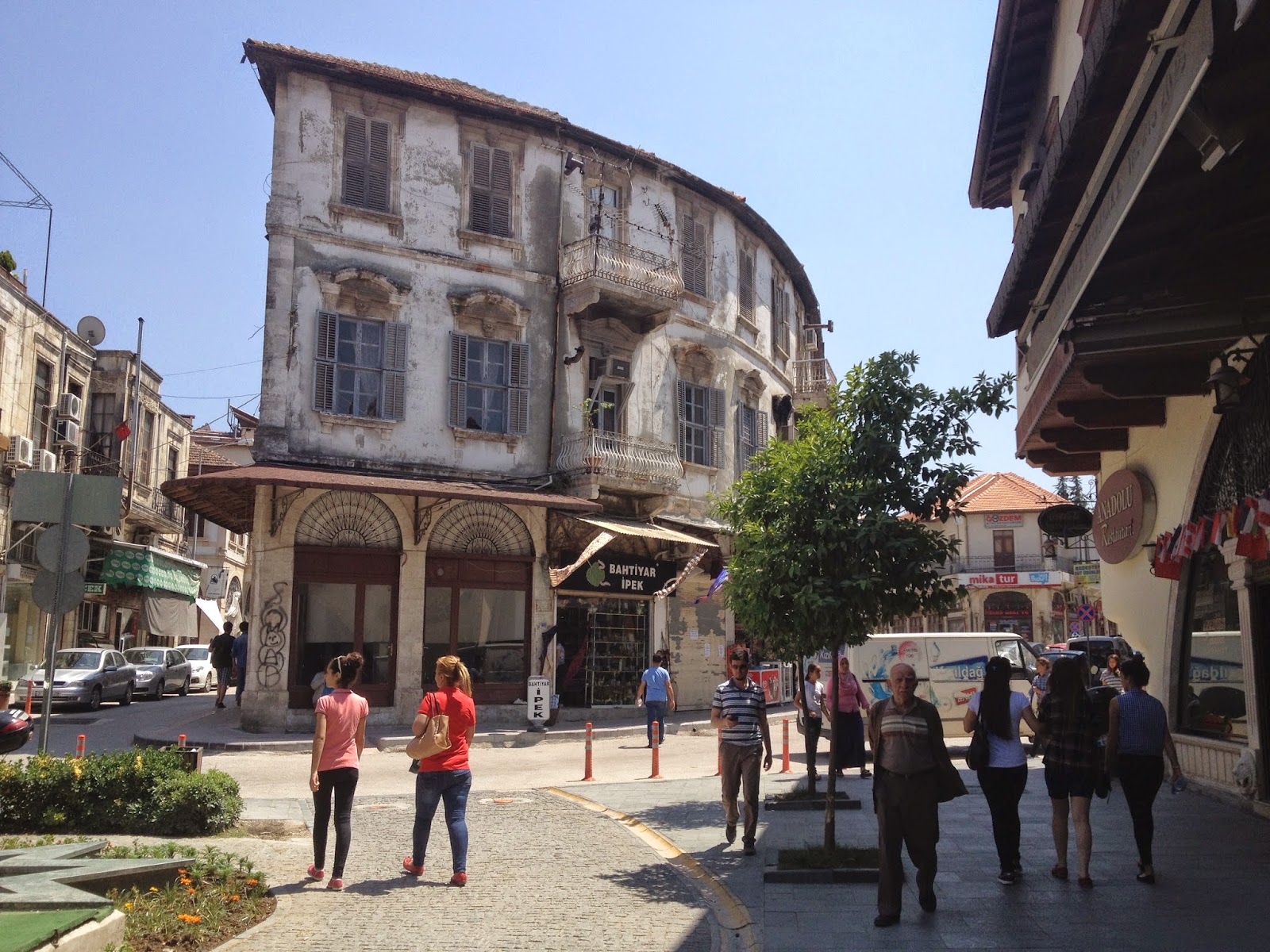 It was small consolation as soon we would be back at the airport, and this time to leave for good. As we were wanting for the conveyor belt to start moving and bring us our luggage, I recalled Antakya nestled in the mountains and hiding untold riches. Another lively place in a small corner of the world I was blessed to be a part of for a while.


Back in Istanbul we saw the first unmistakable signs that told us time doesn’t stand still. The Novotel they are building next door to were we stay, now has a frame of concrete and the mess on the street is almost cleared. Students are leaving and won’t be replaced because the university is abandoning this site as off the end of summer. When I take down my laundry, I notice that the mess hall no longer serves food. The kind ladies who sell me tokens and soap, no longer there. 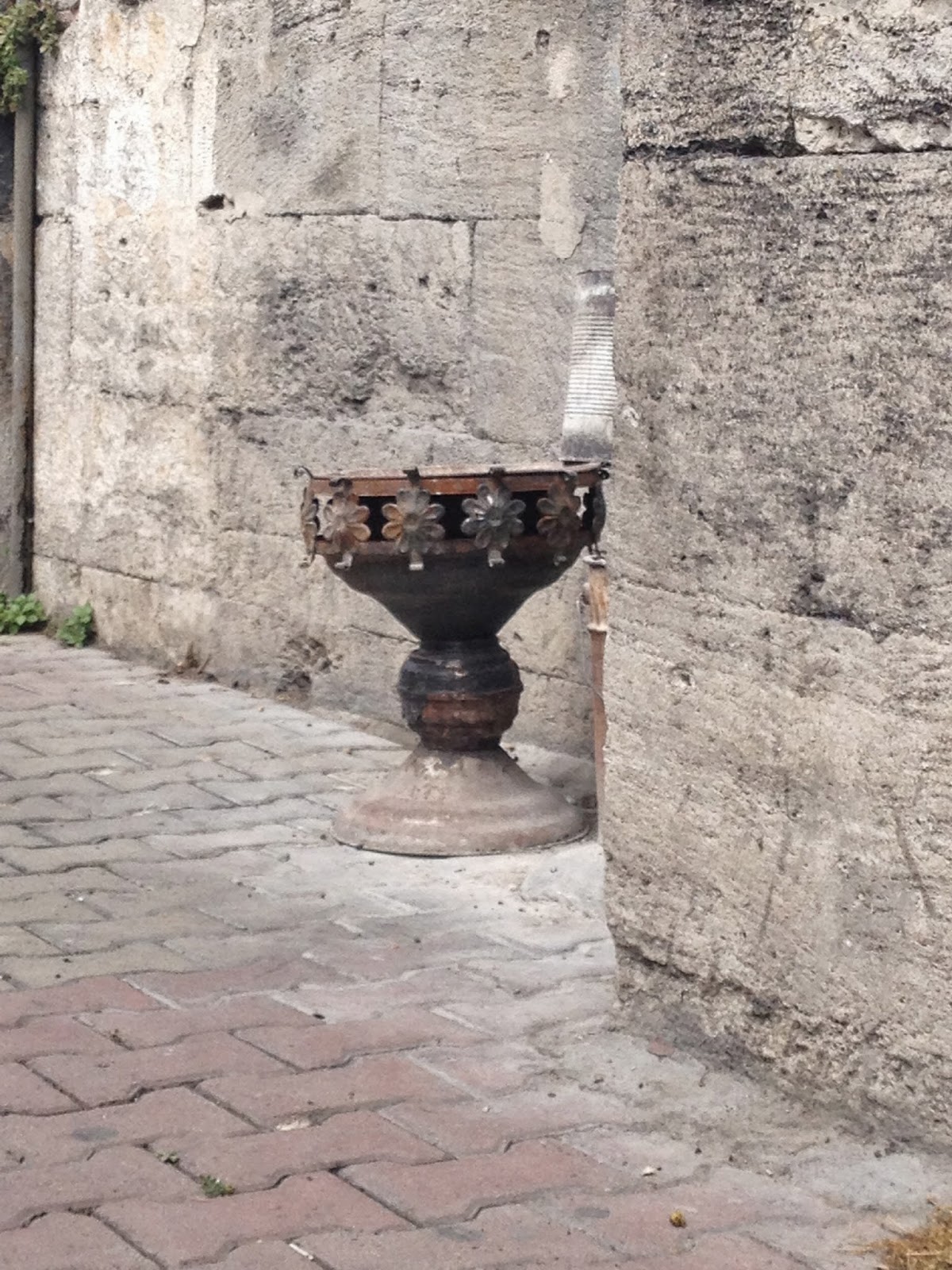 From the post office where I went to post a card to my mother, I walk back slowly, aware that this might be my last walk back this way. I take the path that leads to the parking lot for Istanbul Modern, a place I have yet to visit. It also leads through a small street called American Bazar. It consists of a string of nargile places with their sweet smell of watermelon hashish. It hugs the flanks of my favourite mosque, the baroque Nusretiye Mosque. 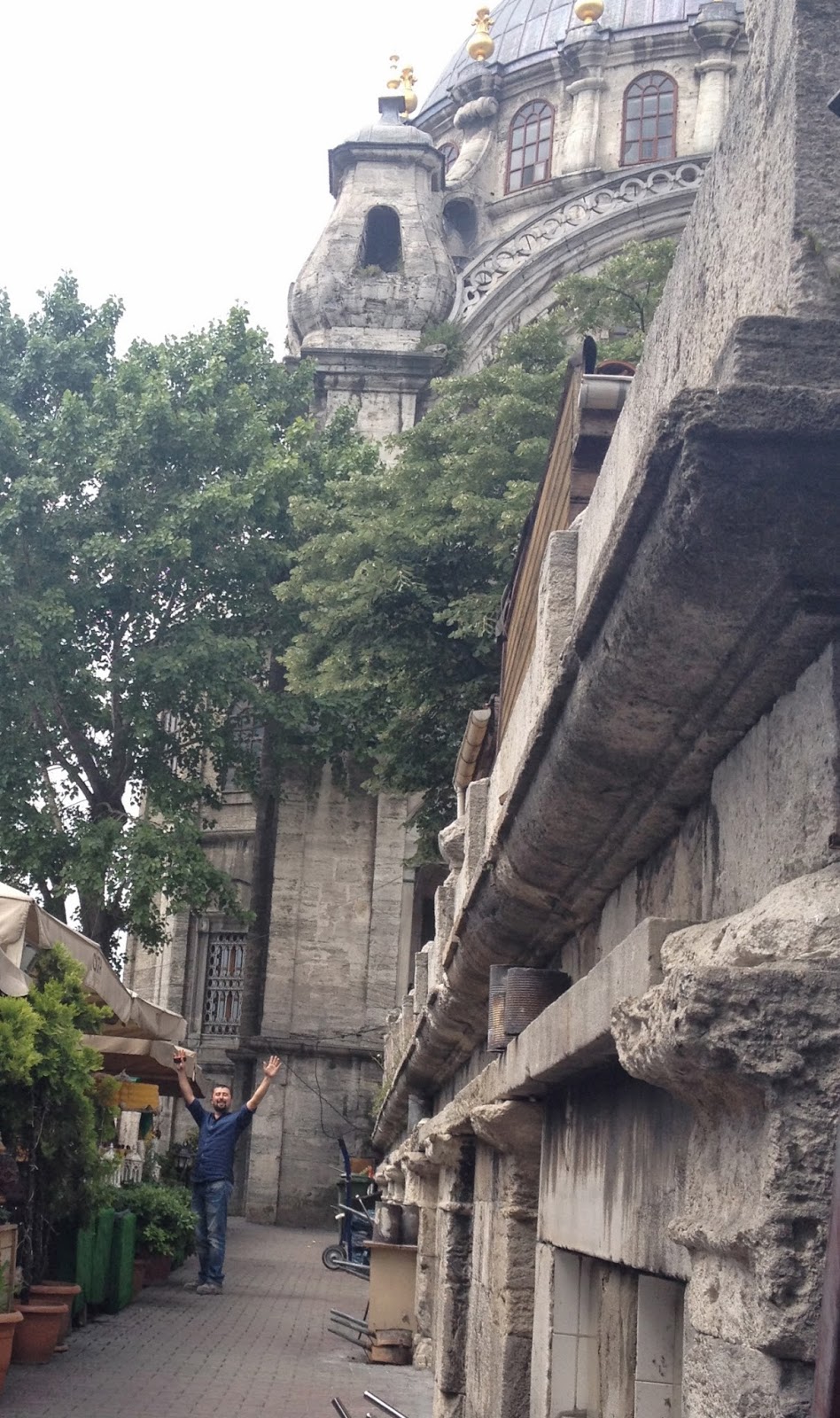 When I aim my camera to take a picture, a young man in the distance notices me and jumps with his arms spread wide. I walk by the old building of the Department of Visual Arts, through the parking lot and into the maze of streets where we would sit in the evening for a meal and a last tea.
None of this will be the same if I were ever to come back. This place is moving forward. Yet another small bistro has opened next to our favourite Muhit. Next to the place where the employed scavengers come, hauling their huge bags on wheels full of recyclable material, an event of some kind is being staged.

But, I tell myself, you are not yet gone.
Saying goodbye doesn’t happen in one day or in one moment. I still have a few things to see and we still have an overnight trip planned. So I pick up my pace and walk by my favourite bakery where the kind lady sells me a cheese pie.
Then I walk home. 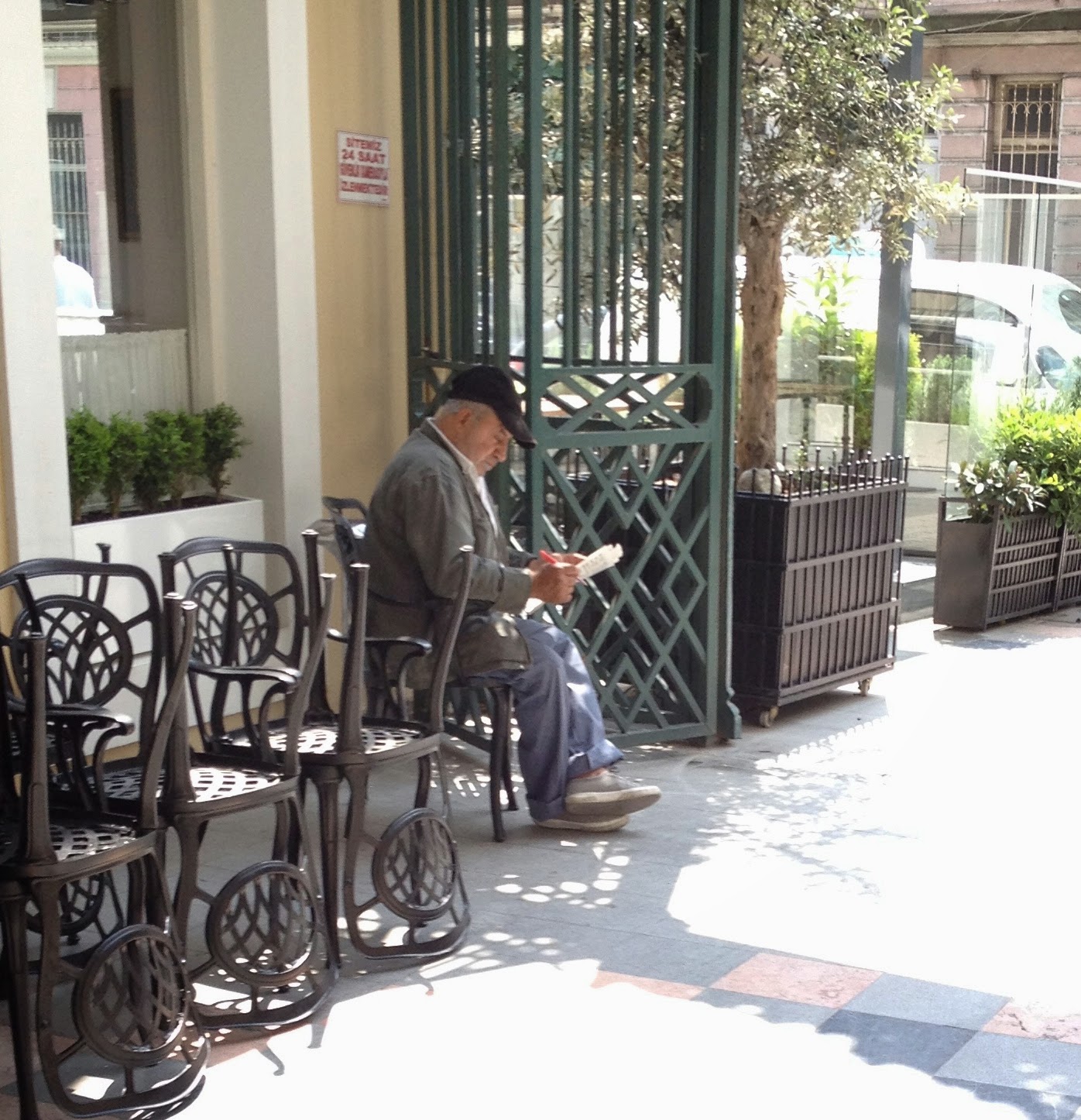