Istanbul is a great city for urban athletes. You can get many places on foot, always have a nice view, and never want for a fragrant cup of coffee and a little something, should you need it. However, if walking is not your thing you have many, many choices. It is said that in Istanbul nine million people, take nineteen different means of transportation, twenty one millions times a day. There are ferries, trams, funiculars, cable cars, subways, regular buses, metro buses, all accessible with the swipe of an electronic pass or a 'jeton'. There are mini buses, tourist buses, shuttles, and yellow taxis galore. These don't belong to the main system and only take cash. There is a train that goes underneath the Bosphorus and there are sea taxis. Whichever means you choose, getting around is cheap.

The other day, we boarded the ferry to go for a walk at Uskudar. I was hoping to have a romantic sunset at Kiz Kelesi, with as backdrop the Hagia Sofia, the Blue Mosque and Topkapi, all this against an orange sky shimmering above the sea. Never happened. The weather just wasn’t sticky enough. But we did walk by Kiz Kelesi, and beautiful she looked. The place was full of people sitting on the bleachers, installed for the purpose of watching such a sunset.
We kept walking down the long promenade. Here and there boys and men were jumping in the water for what I presume was a refreshing enough swim, regardless of the pollution. We walked and walked and then we walked some more because, by now, we had become obsessed with reaching Kadaköy even if, from all accounts, it wouldn’t be easy. But the Barracks, where Florence Nightingale established her trade, beckoned me, and so did the Marmara University building. Both always looked so lovely from outside my window when they lit up in the evening.
Th, once set on a course, just wants to get there. He led the way with vigour on this 10 kilometre walk.
A great obstacle to walking all the way to Kadiköy is the Haydarpaşa harbour. It receives large container ships so we knew there would be no way we could just walk through. And before long, we were stopped by a large and busy bus terminal. Clutching one another’s hand, we dashed across a scary road and then started the steep climb that would take us around the Barracks.
We forged ahead in the hot humid weather like mountain climbers set on reaching the top. The Barracks, we learned, are still in use. No photographs allowed. Beyond the Barracks the luscious grounds of the large military hospital. Next to it, on top of the hill, the Faculty of Medicine of Marmara University. 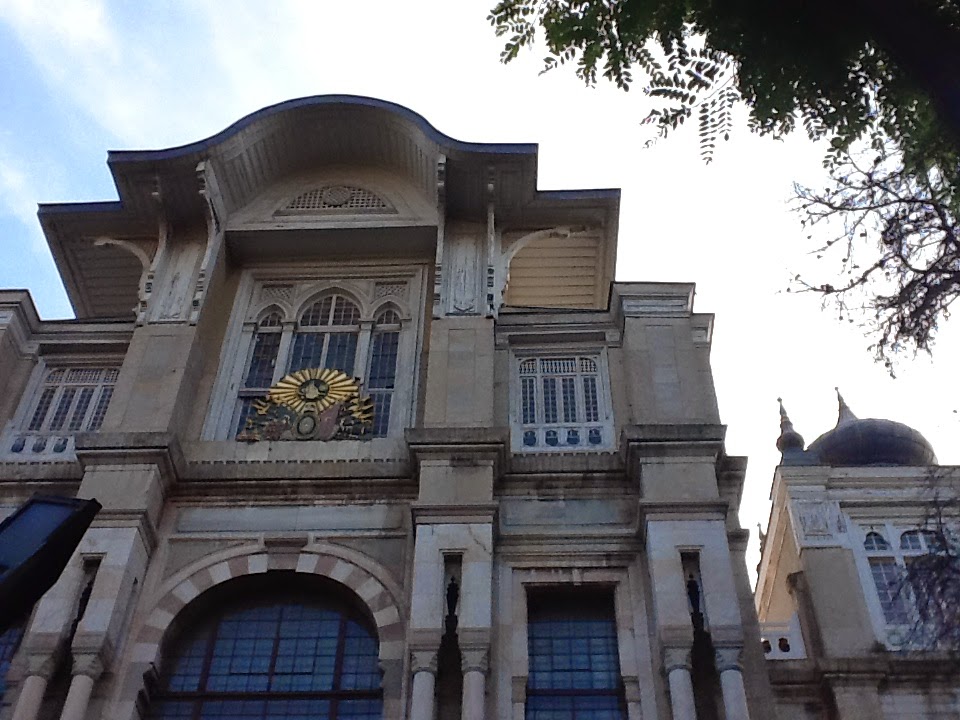 An impressive building, it was built in the late nineteenth century. It looms large and dark, menacing almost. Its style incorporates elements from First Nationalist Architecture to Art Deco. Behind it, a shadowy view of the Sea of Marmara dotted with moored ships waiting for customs clearance before they sail the Bosphorus. 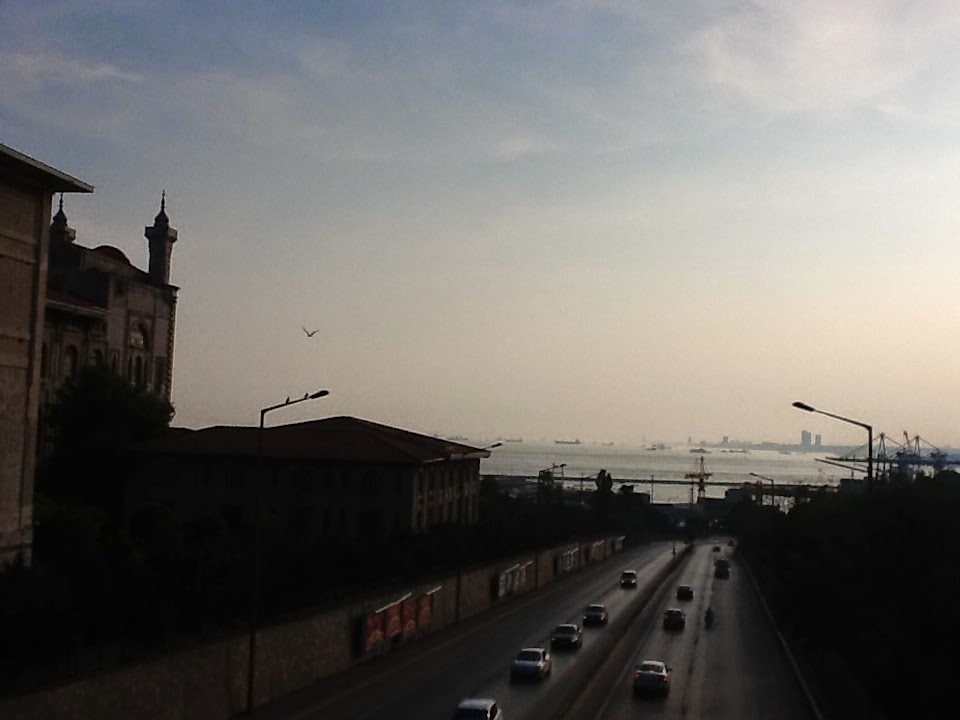 Soon we crossed the bridge behind Haydarpaşa station. It still actively connects Istanbul to the rest of Asia. And it still serves as a retirement home for discarded trains. We stopped at the bridge, two tiny dots in a large world. Still, wherever we went, down the avenue laden with thick green trees, by the grounds of the Military Hospital, and even here, on the bridge, we were not alone. A girl was taking the picture of abandoned trains stretching like shiny tentacles away from the station I wanted to take. 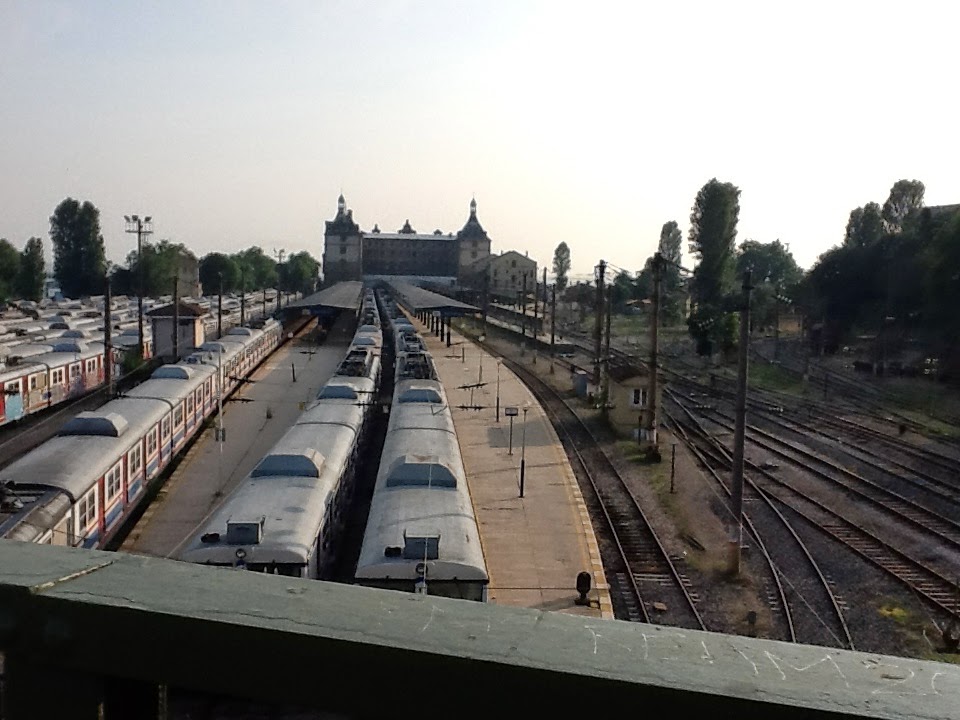 And then we were there.
After a delicious dinner at one of the many restaurants in the car-free streets of Kadiköy Market, we walked back to the ferry. The Anatolian side of Istanbul is considered the secular heart of the city. People who live there tend to not bother with the old city and the other parts on the European side, unless they have work there. There are less mosques and less ardent faithful. The waterfront where ferries dock that take you to the other side is another one of those spaces that mimic the large open waters separating the various parts of the city. Getting from the safe Market area to the ferries is not the easiest as streets are busy and crossings few. Again we clutched one another’s hand as we proceeded, only to be stopped by a cordon of heavily fortified police, who were proceeding by two’s toward a demonstration by Kurds, right in front of the place we wanted to be.
Each policeman or woman was outfitted with transparent bulletproof shields, weapons of all kind, and a gas mask, just in case. The demonstrators were holding up banners and chanting slogans. 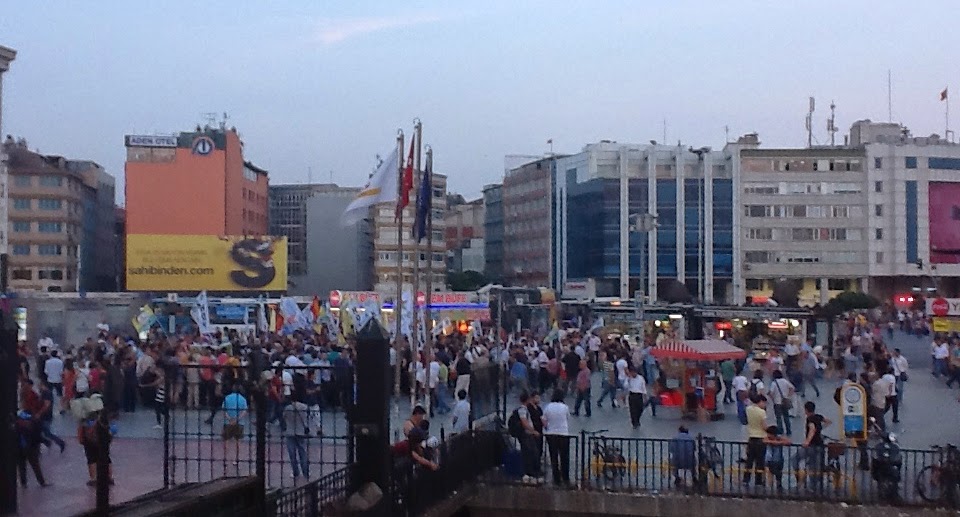 Two policemen stopped to break the line. They waited graciously so we could pass. Then they joined their colleagues, who were already stationed at a nearby building.
Clearly, the stance indicated a wait and see attitude but the outfits said, we are willing and ready to do what it takes. They were friendly enough with a pair of pathetic outsiders, but we knew how forceful they could be with those who thwart the will of the authorities. There were about as many police as there were demonstrators, but the evening passed peacefully for all, in as far as we could tell from the news.

The next day was Golden Horn day. This we schemed with the helpful and not so helpful information people put on the internet. 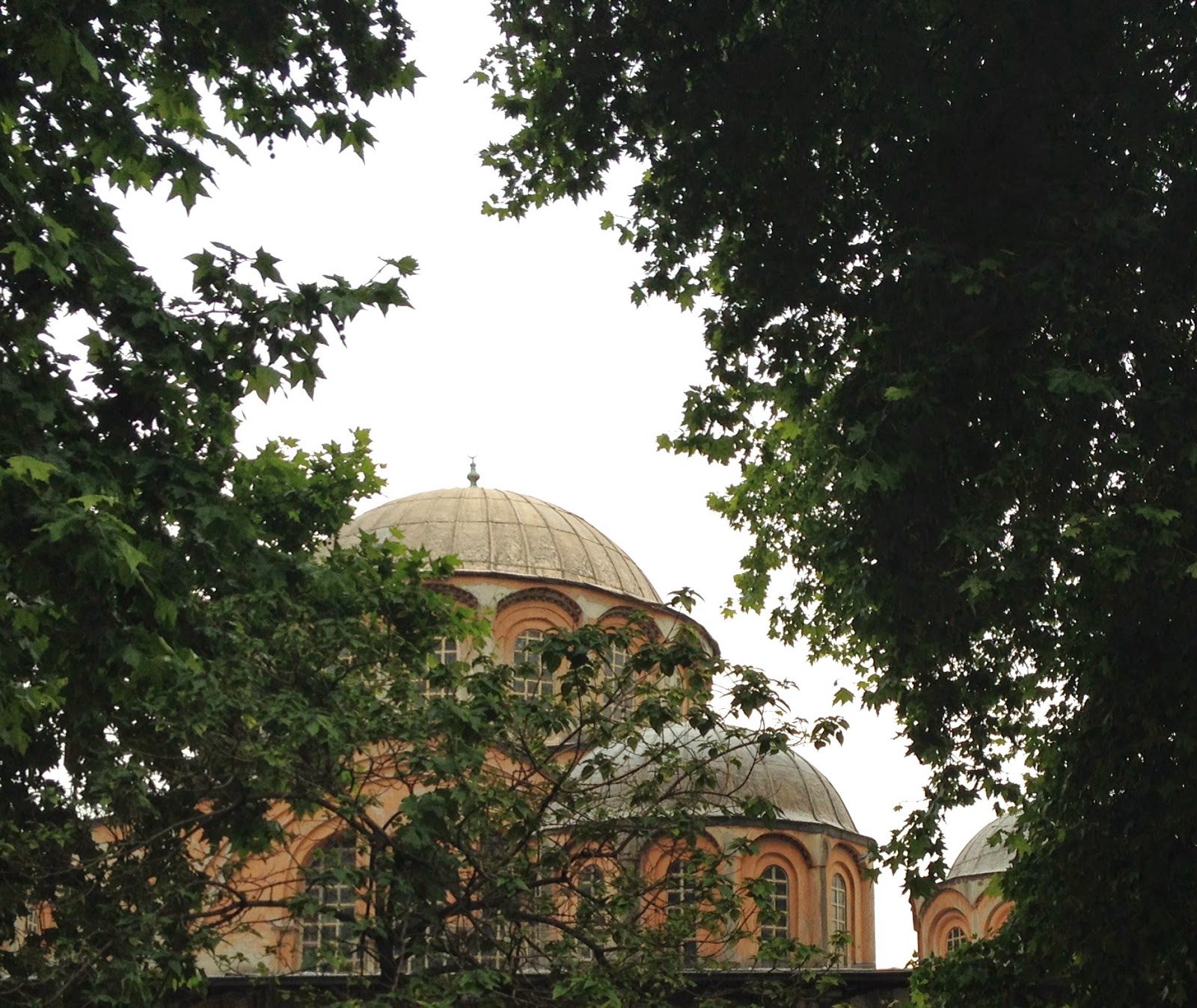 First stop, the Greek Orthodox Church turned museum with its impressive fourteenth century mosaics and frescos. Chora is in the Fatih district. The museum lies just inside the city walls that still draw an impressive ring around what used to be Constantinople. Fatih has many impressive buildings. It houses the Patriarchate of the Greek Orthodox Church and a building that used to house a Greek high school, its lay-out reminiscent of a flying eagle. There lived about three hundred thousand Greeks in Istanbul at the turn of the previous century. 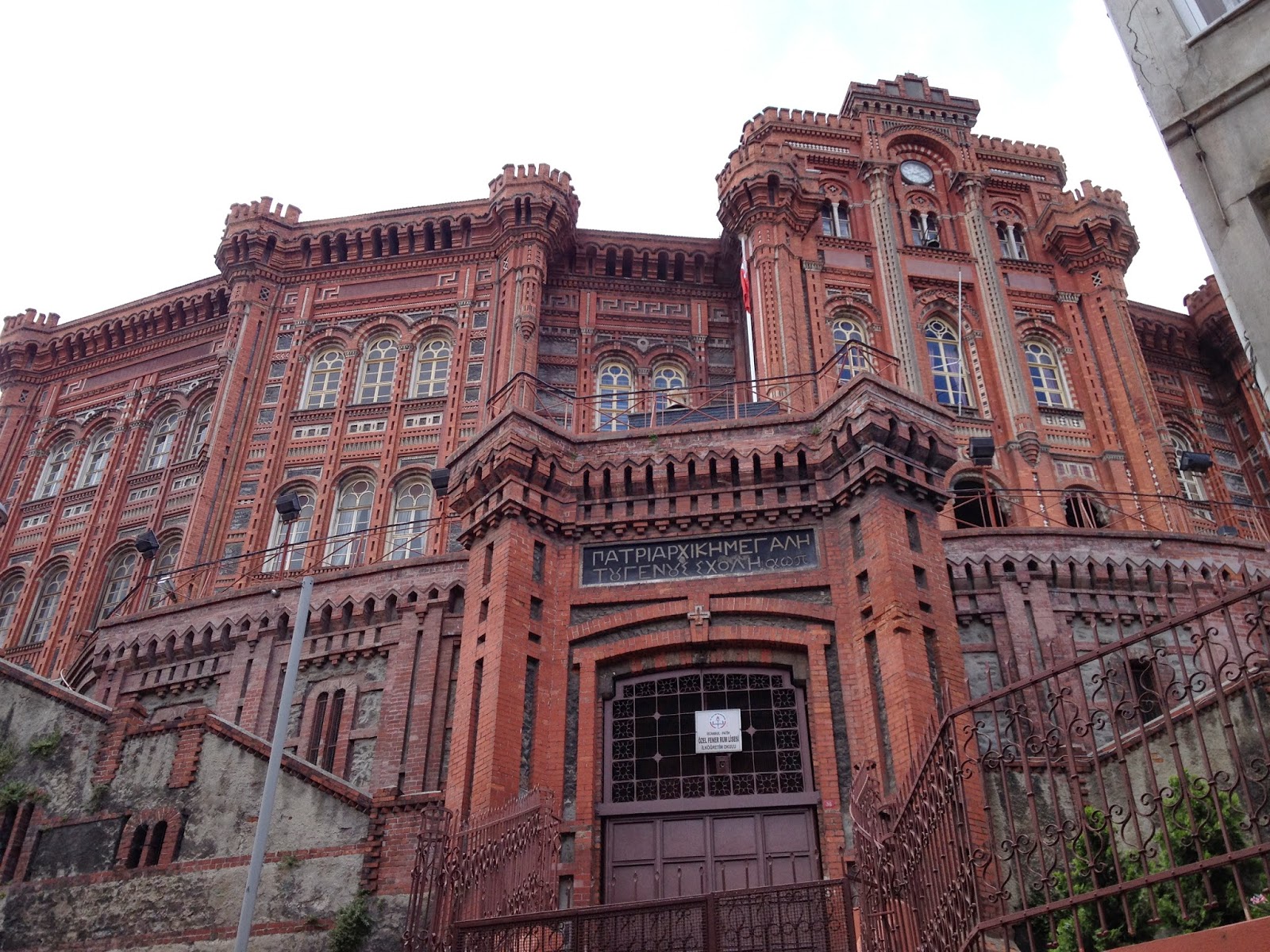 Fatih was abandoned by the middle and upper classes for Anatolia, the Asian side. Today Fatih is, not necessarily fairly, regarded as one of the most conservative areas of the city, on account of Carşamba, an area that belongs to ultra conservative Islamites. We saw men of that neighbourhood on the streetcar, in their traditional coats. The women wear all black and rarely venture outside and never alone. We didn’t go there but we walked down by the wall, with me snapping pictures as we went. 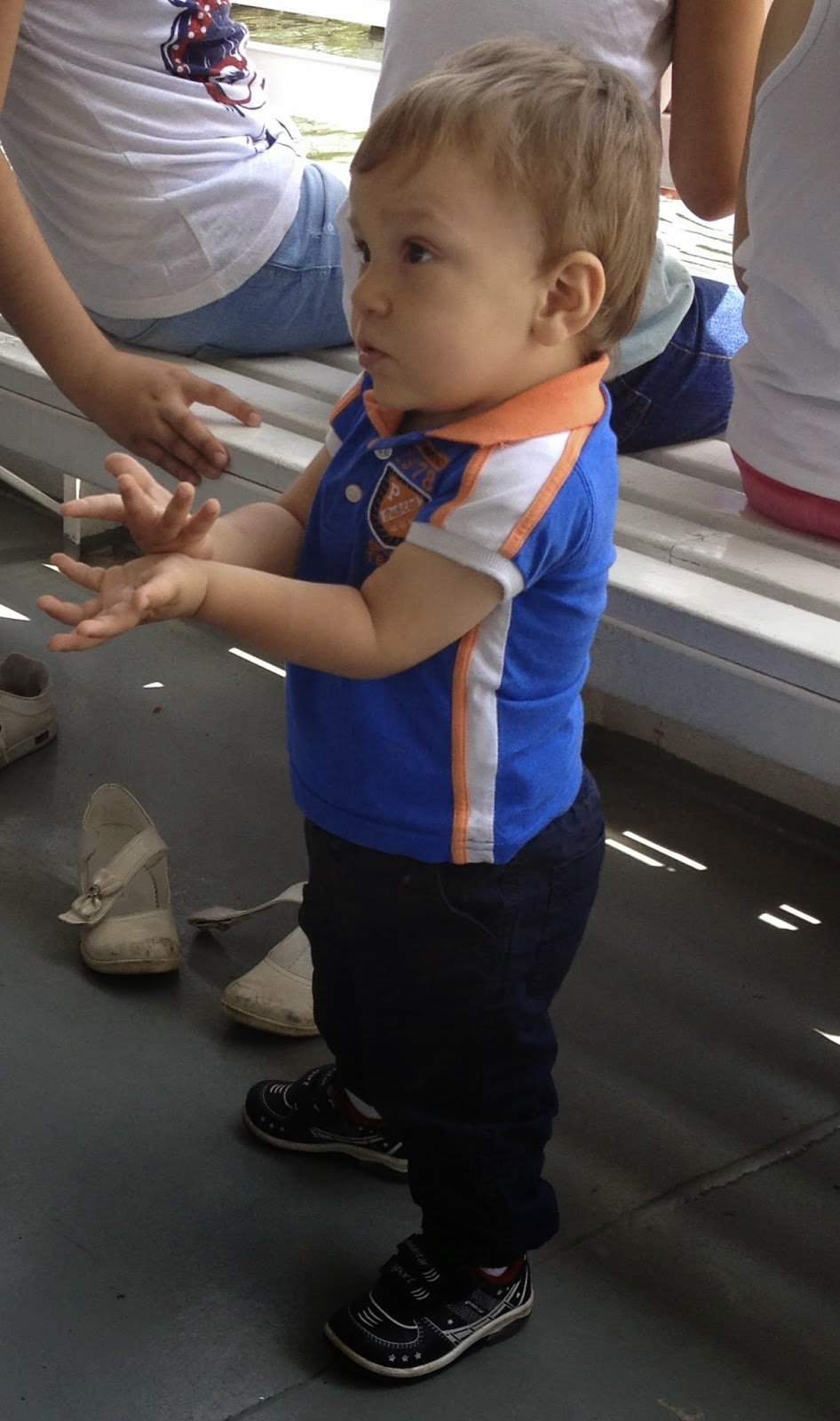 However, when we tried to get from Chora to our next point of destination, we ran into a snag. The snag being that the information from the internet did not coincide with the reality we encountered. The snag also being that we didn’t bring a map and that the taxi driver who was waiting for people wanting a ride from Chora to Pierre Loti was treating us like tourists who knew no better than to pay the outrageous fare he was demanding.
So back to public transport and, this time, we became acquainted with the minibus. This system of transportation is not a part of the government run system so our electronic pass was useless. They only take cash and they do obey routes, somewhat, because you can flag them down anywhere and they will also go out of their way to drop you at your destined place. All for one low fare. 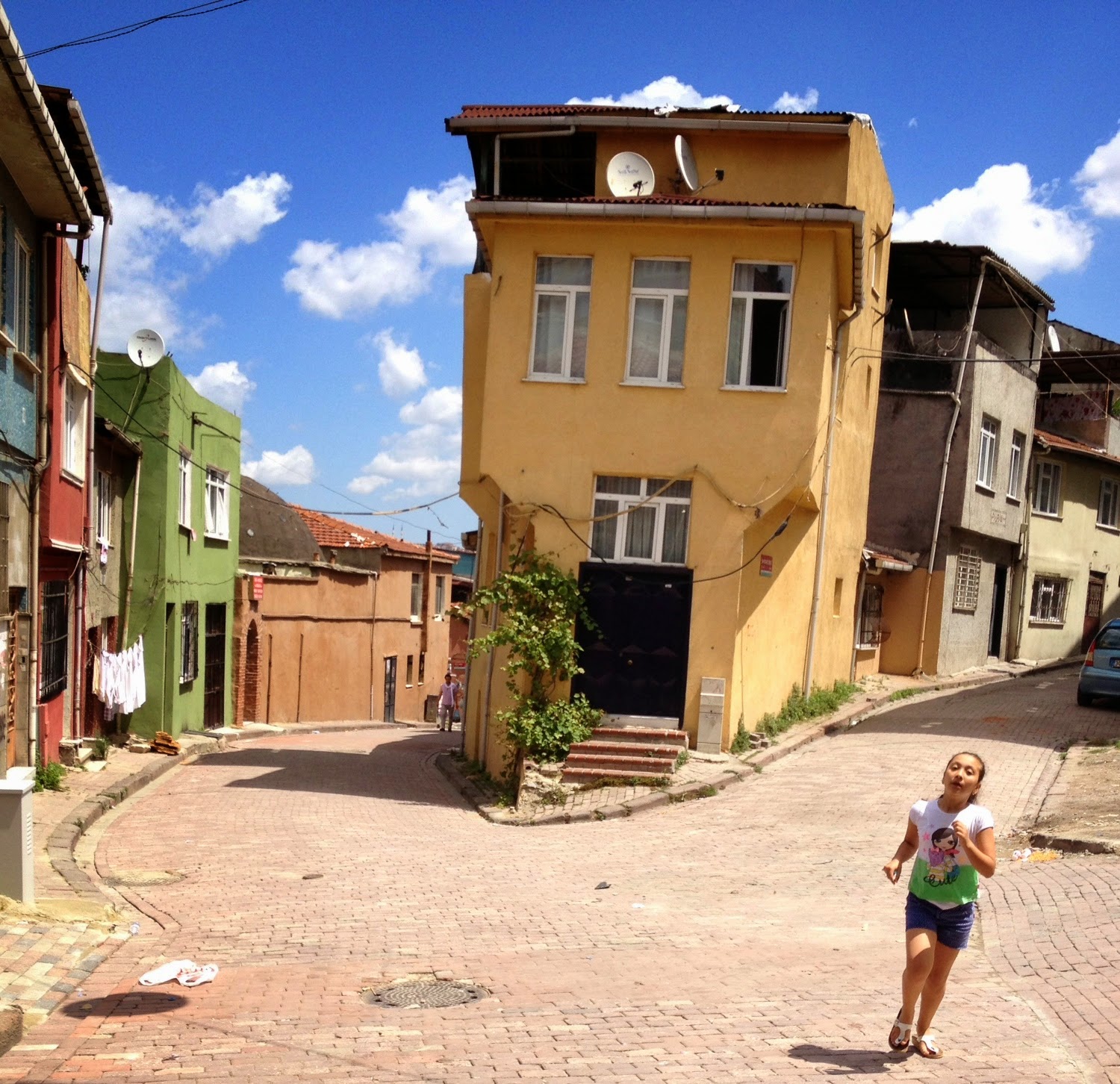 The minibus is not for all tastes but you do get to see the old city as you go up and down streets and hills with passengers, no tourists on our trip, getting off and on the bus. We were on this bus for a long time and wondered, at times, if the driver had forgotten about us. But he hadn’t. It wasn’t a luxurious ride but it was safe and the driver went out of his way, after he arrived at his final stop, to take us to Pierre Loti.
And with a smile. A real bargain.
Pierre Loti. Slip of a guy. Frenchman. Now here is a man one can admire. He was only in Istanbul for three months, stationed there late ninetieth century, with breaks in Greece. He had a hill named after him. In Istanbul. A hill with a cable car that will take you from the lofty place named after him, on top of a cemetery, all the way down to the Golden Horn and the bottom of the cemetery.

Loti did not conquer anything in Istanbul. He just loved that coffee shop and the view and used to spend his time there whenever he wasn’t busy pursuing an eighteen year old harem girl, while he also woed a Spanish manservant named Samuel.
At the urging of his friends, he wrote a novel about the things he jotted down in his diary. It was published and gained him acclaim. The French loved him. The Turks were mixed but, however many Turks were not necessarily impressed by his orientalism, he has this spot on the hill named after him.
A favourite place where tourists and locals alike come for coffee, tea, and the view.
Getting down from there to the ferry involved a ride in the cable car, and some more intense handholding on the part of Th and I. There was no clear path and every possibility involved crossing well used roads. But we got to the diminutive waiting room where we joined families with their children, waiting for the boat to come. 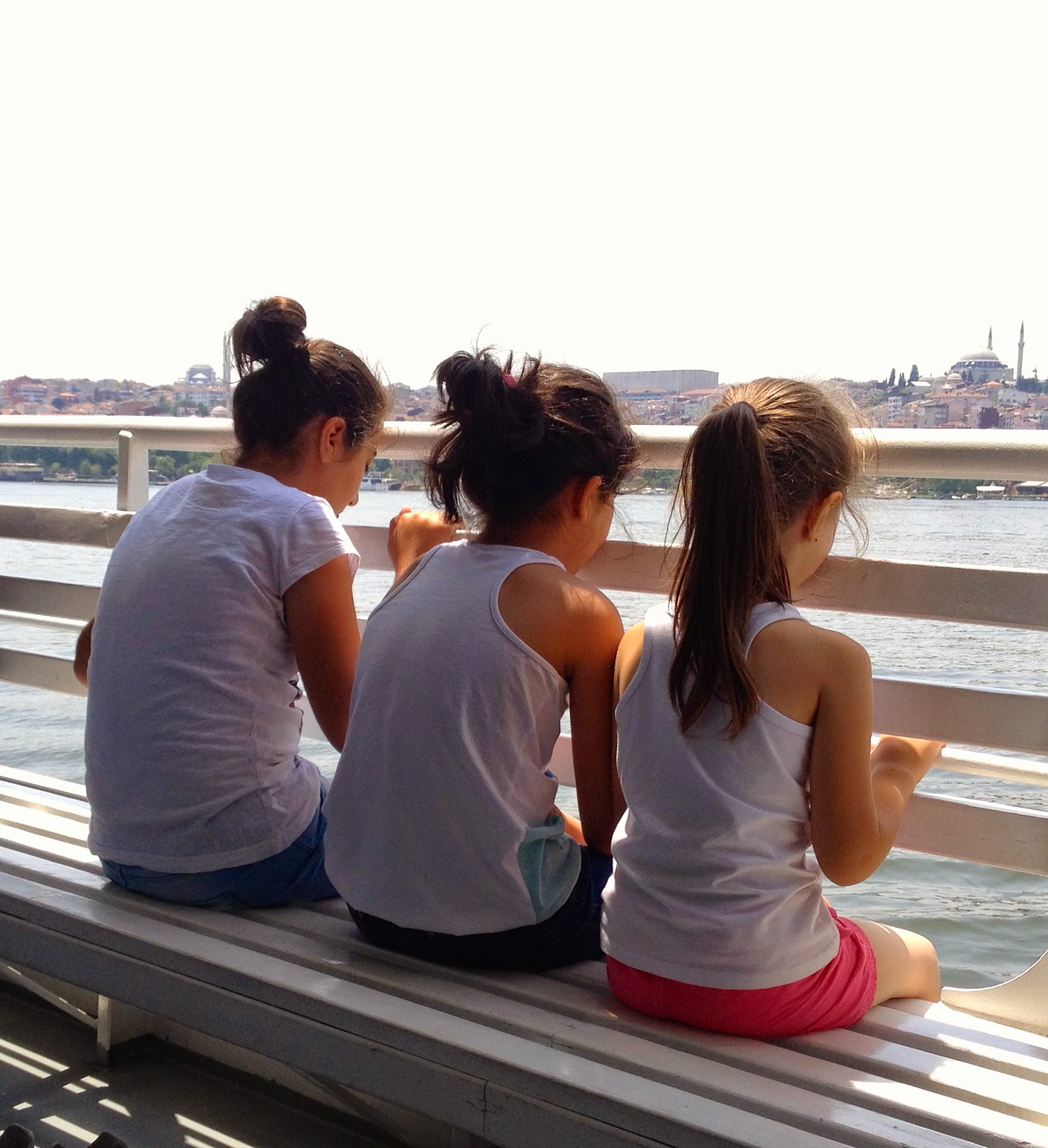 One child stood out. A boy. He looked like the Little Prince. And I was to learn later that this was his day. The day of his circumcision.
I was captivated by him. A boy of about seven or eight dressed in white satin, with gold trim. A cape, leggings, and a teardrop hat. With dewy cheeks and large eyes, his looked out at the world with innocence and wonder. But there was also a sadness and vulnerability about him. After all, this was the day he was being paraded around in his beautiful suit to show the world he was about to become part of the community.
Circumcision in Turkey, amongst the faithful is the day when the community and families get strengthened because of one child. The child gets to dress up, be the centre of attention. He gets money and valuable gifts and he gets the equivalent to a godfather. The families of the child and the godfather are forever united. Rich families will sponsor poor families. It is a ritual that is proudly described on the website of the Turkish government’s Ministry of Culture. 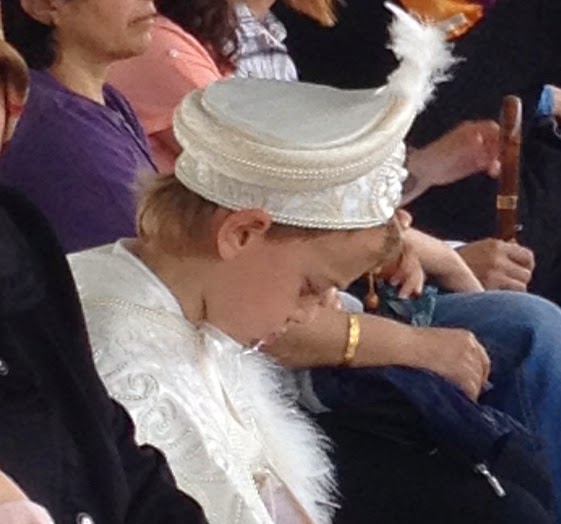 I had no knowledge of any of this when I met my Little Prince, but I sensed his mother was not averse to the attention I gave her boy. Now I understand that she wanted me to take his picture because it was part of the success in showing him of.
But he shied away.
The boat chugged on, going from one shore of the Golden Horn to another, dropping off people and picking up other ones. We passed the building that used to house the Greek high school. We passed the Marine Museum and, after I had long given up, not wanting to force this child to do something he had no desire doing, he stood before me. His hat gone, his face polite and obliging as most members of this well-behaved society are.
As soon as I took his picture, he scooted away. Maybe he had bargained with his mom: I’ll let her take the picture, but no hat! I looked at him as he sat by his mom, his eyes gazing at the shore. No doubt, he was contemplating the fate that awaited him. 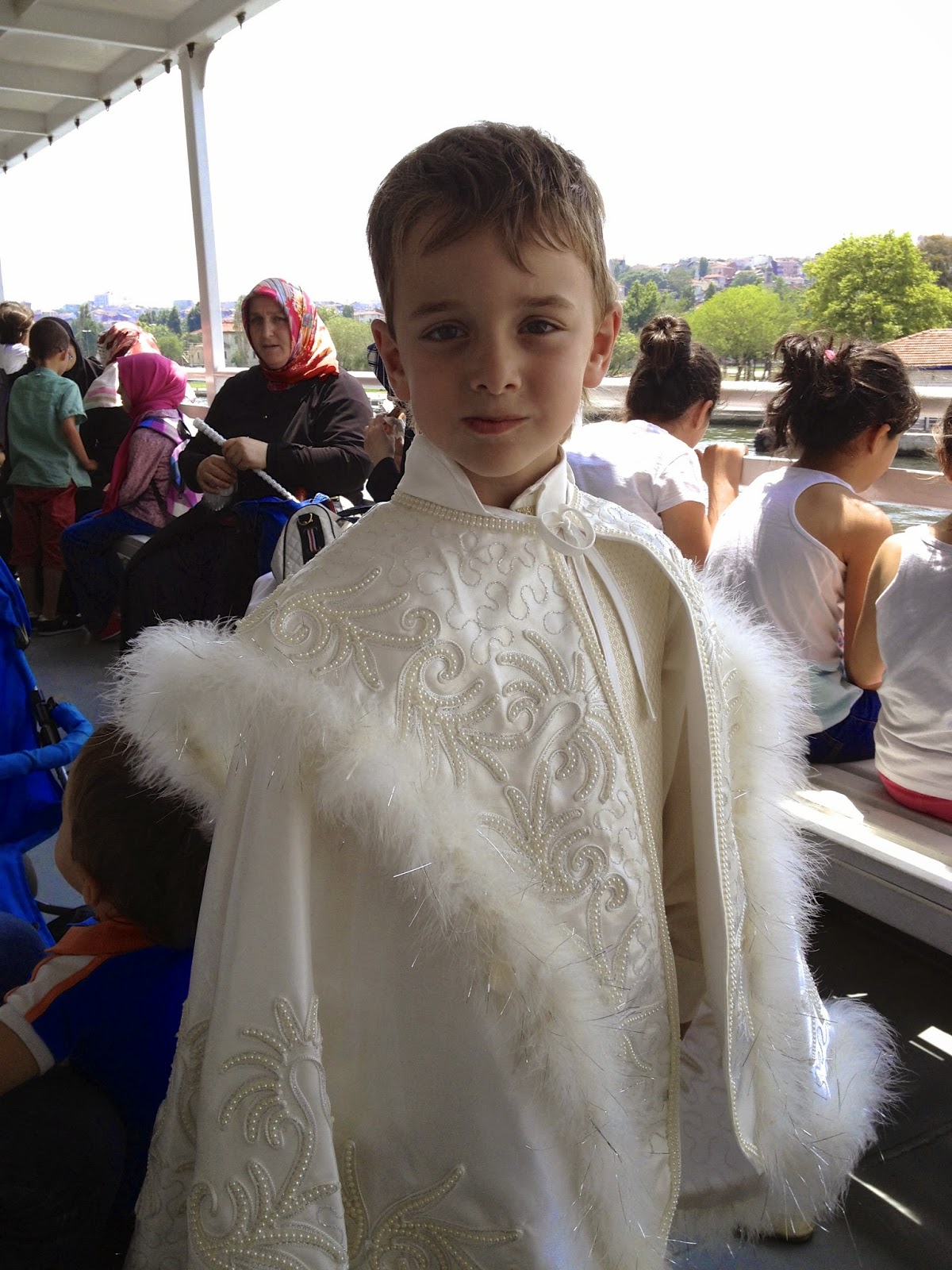