The major airports I have visited all look and feel pretty much the same, but not so Istanbul. Not that it is as different as all that. There was the initial safety check before you even get through the front door. That was new to me. There were lots of people dragging giant packages, many of them with food as the scanner showed. I had not seen that before either. There was then American woman, looking like she couldn’t wait to get back to all that is familiar to her. But none of that made the difference. What made it so was the fact that, for the first time in years, Th and I are travelling together on airplanes again.
Th is a frequent flyer and over the years he has gained VIP status, which means he gets priority boarding for himself and the Missus, and we get to sit in the private lounge even if, strictly speaking, I don’t qualify. Being a wife does, though, and I too was fed for free and able to lounge away from the crowds.
But it wasn’t even that. Then it dawned on me, as I was sitting back savouring my salad, that I had forgotten how my husband moves whenever we are heading for a timeline. With the swiftness of a gazelle fleeing a pride, he parts people as if they were grasses waving in the wind. I followed in his wake and was going faster than I ever remember going before.


I had also forgotten how he makes friends wherever he goes. We were off to fortify his stash of cigars. As he carried the package with the label ‘smoking kills’, I asked him if he considered keeping a stash big enough would keep the grim reaper at bay. He nodded. Before I could say another word, though, he was already showing his haul to the sales clerk. When this man saw Th’s passport he threw in a Greek word or two and an instant friendship was born over a soccer team they both admire.

We arrived late at the Leonardo Da Vinci airport and took the bus from the airport, for our two week stay in Rome. Rome is “Una Grande Signora”. She is definitely middle aged and she’s showing it at the edges.
The airport is old. The streets, as you first leave the highway, look in need of repair. But as you wend your way towards her heart, you see the faded beauty in the old and tired lines. There is a sense of the beautiful here as you find nowhere else. To my mind, she is that old woman walking down the street, her shoulders a bit drooped, her hair a dusty wig.
Then, when she turns and smiles, she dazzles you. 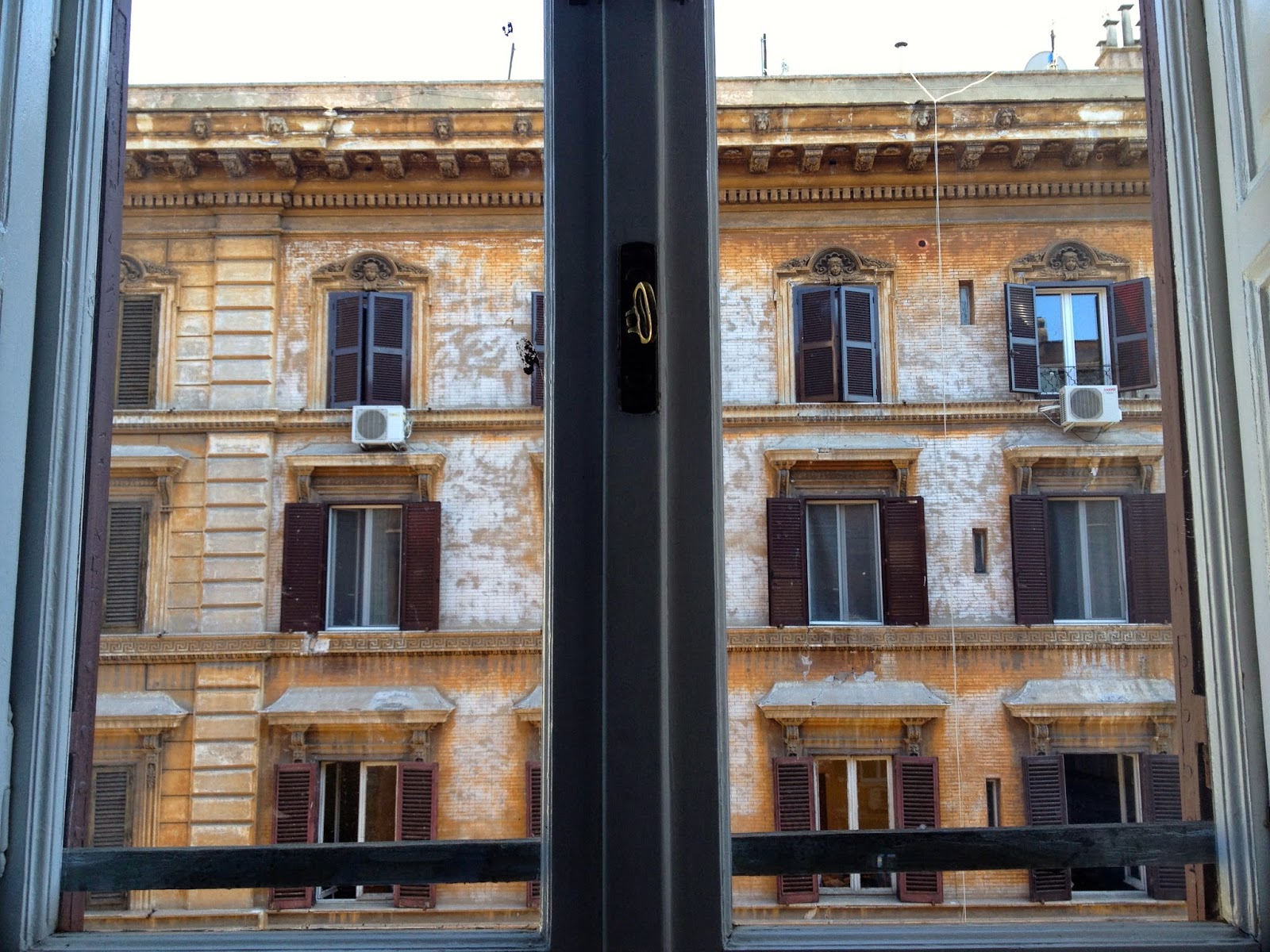 As I sit here, at my new desk, I look out yet another window. My view  is not what it is in Istanbul but, in a way, it is more intriguing. Through the window, with its white frame, I look upon the facade of an Umbertine building. It looks worn, the ochre paint faded and chipped, the eaves troughs lined with carved faces that are either lions or humans. Each window has brown Venetian shutters and embellishments. The windows on the top floor have been designed with extra care as they too have carved faces. Here the faces are at the top edge of those windows and framed with an arch draped with sculpted fruits. All this gives the impression of a well-kept woman who still paints in her eyebrows with care.
The beautiful face of Rome. I’m living in a building in a city that is full of such buildings that become ordinary yet never fail to enchant. In Italy it is important to always look your best. The room where I stay has large mirrors mounted on every door.
I never leave without a last check. Like Rome I want to look good, even if I too am past my prime.
Where it concerns Rome, though, you could say there is nothing but beauty. Of course, that isn’t so. However, if you want to go and find what isn’t beautiful you will need to look deep because beauty here is not just on the surface of the skin. Here you get the sense that good form is a way of life that has the power to light up life, so when you find a polluted fountain in a forgotten corner, you discretely look the other way.


As if it is an aberration. Something that isn’t really there.


In the midst of my early morning ramblings Emiliano, our host, walked into the room and asked if we wanted to go for breakfast. He took Th and me down the four flights of marble stairs, through a walkway lined with potted plants, an inner courtyard with a garden, and out the large gate that has a small door carved out for easy access.

And we were on the streets of Rome. Before me and behind me I saw rows of apartment buildings like the one facing my window. At the coffee bar, we ordered a cappuccino and a tiny croissant, which we consumed standing at the counter.

You pay double if you sit down and are served.
Th beamed at me and said, “No better cappuccino anywhere.” Fifteen minutes after leaving, I was back at my desk writing.
I can feel the city around me, not just in the noise of the occasional car driving through our reasonably quiet street, or the distant wail of an ambulance, or the toot of a horn; I can hear it in the chirp of a sparrow and the vibration of energy of a city that is called eternal and that is voted by many as the number one place to visit.
Istanbul vies with Rome for first place. Istanbul. My home away from home where my room with a view waits for me. 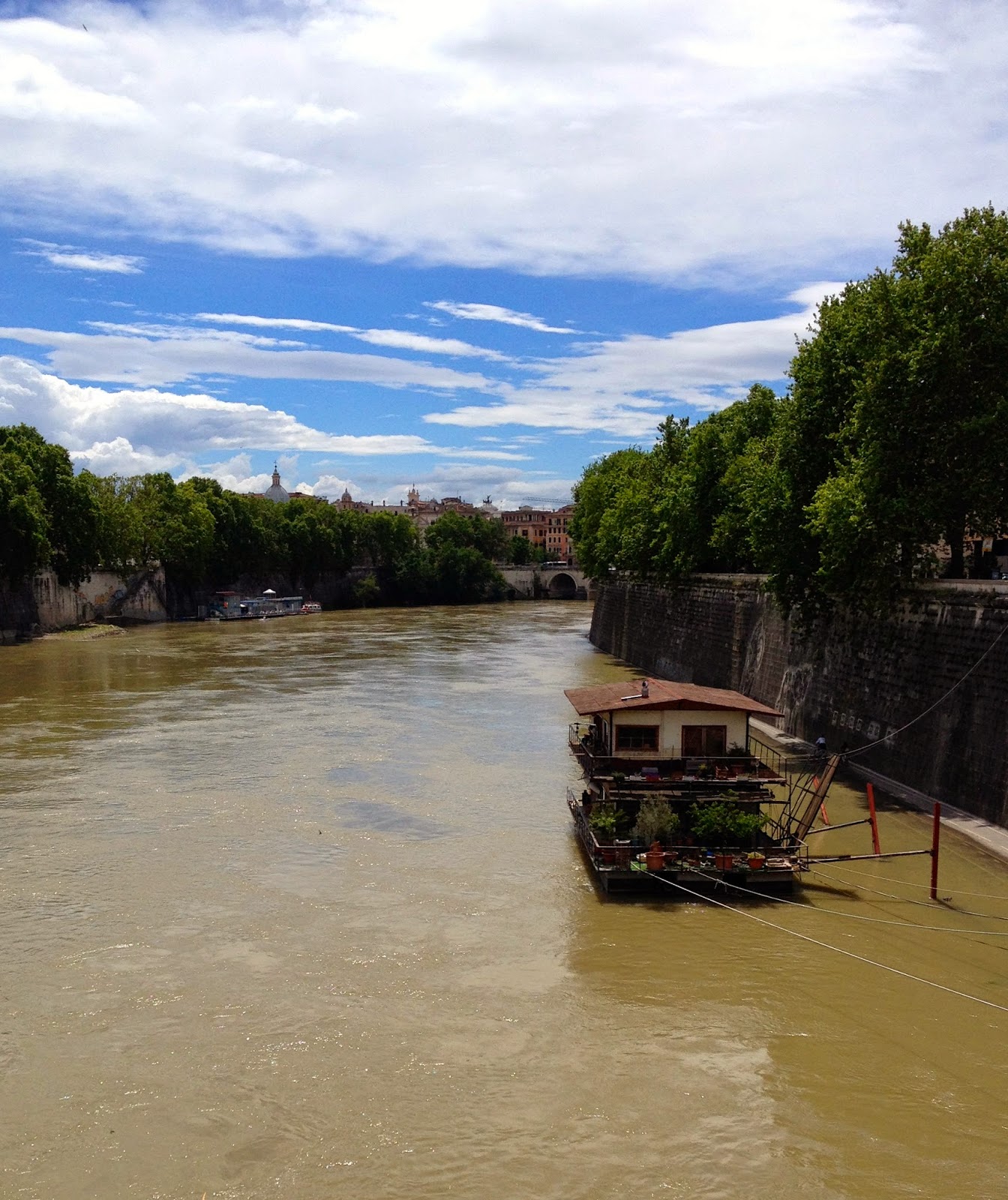 Our first walk through the old city, just a few streets away form here and Ale, our other host, was leading. The Tiber stood swollen from yesterday’s rain, the road next to it, below the high wall, swamped. The water has the colour of pea soup. Ale wanted to show us some of the key points to the historical section, but by the time we reached the Spanish Steps and started commenting on Woody Allen’s clumsy attempt at depicting Rome, we were fed up being with tourists and vying for an optimum view of the many splendours the city has to offer.
Roma, though, basked in the attention she was getting. She was made for it.


We ended up at “Fandango Incontri”, a bookstore that also is a cafeteria, where an interior courtyard has been capped by a glass roof surrounded by high walls and many windows. Here you can get a sense of dining al fresco, even if it rains, and without the danger of pigeon poop ending up in your cappuccino.
When you are in the company of economists, the talk invariably steers toward how countries are doing, how banks are doing, and you will learn much about the state of the world from an economic point of view. As far as I understood, things are in flux and interesting. With a crunchy grilled cheese sandwich in front of me and a fragrant cappuccino, in the middle of possibly the most enchanting city in the world, it was hard to grasp that we live in a world on the edge of something large.
We walked on, avoiding dense tourist spots and headed for Hadrian’s Castle, Castel Sant’Angelo, which is on the way home. A car behind us drew our attention because it refused to just sweep us aside and pass. In a city of millions, in the centre of old Rome, where countless tourists were roaming at large, that Sunday, Emiliano had somehow come upon us with the car.
We got to drive the rest of the way home. 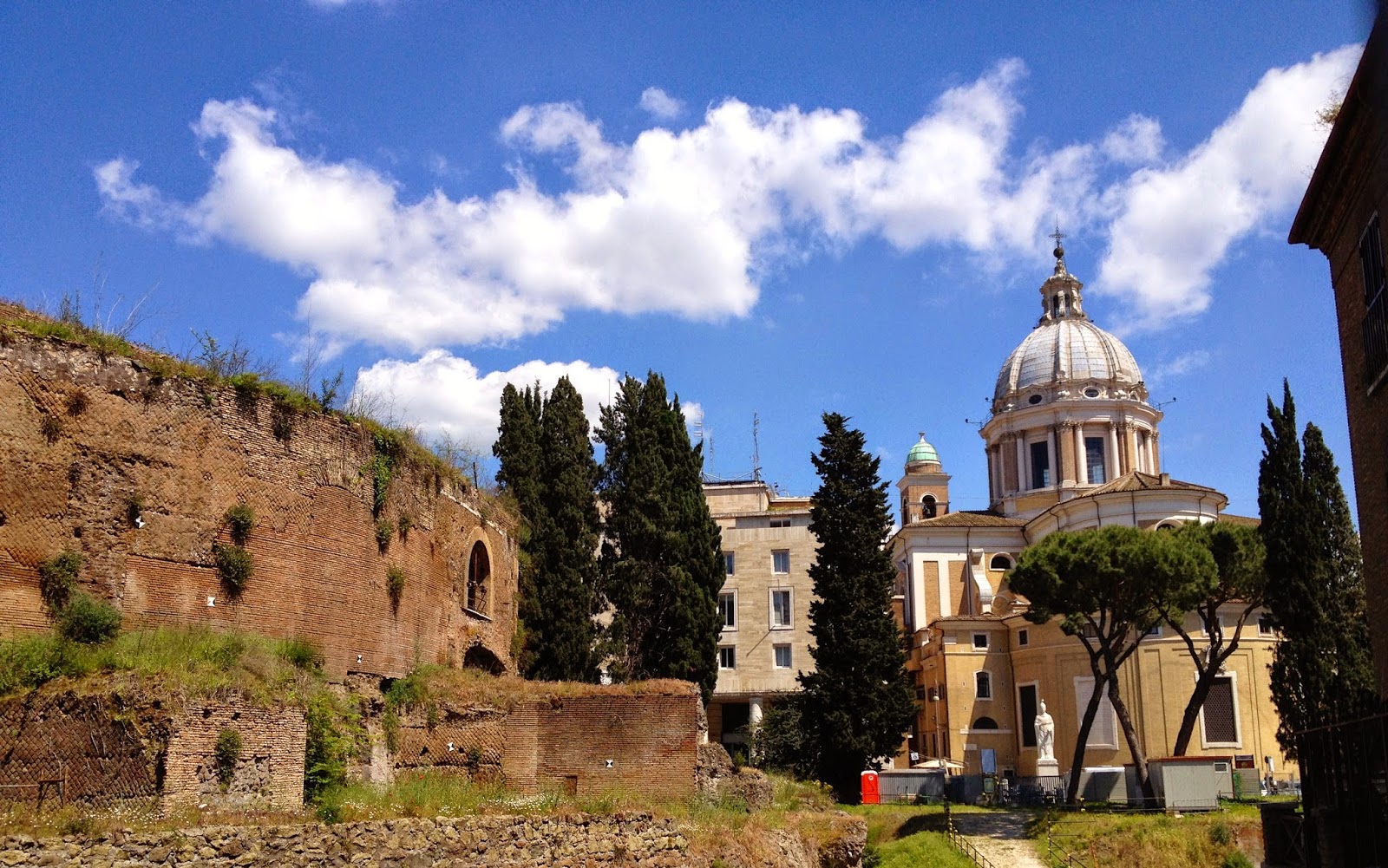