“They are happy here,” she says.
She points to the sleek cats that like miniature lions are resting in the wild grass. We are in her mother’s garden because we were invited for BBQ. Myself and a group of economists. Up on the balcony Persian rugs hang over the railing like planters full of colourful flowers. When she sees our gaze, she points to them. “They will come to Canada.” 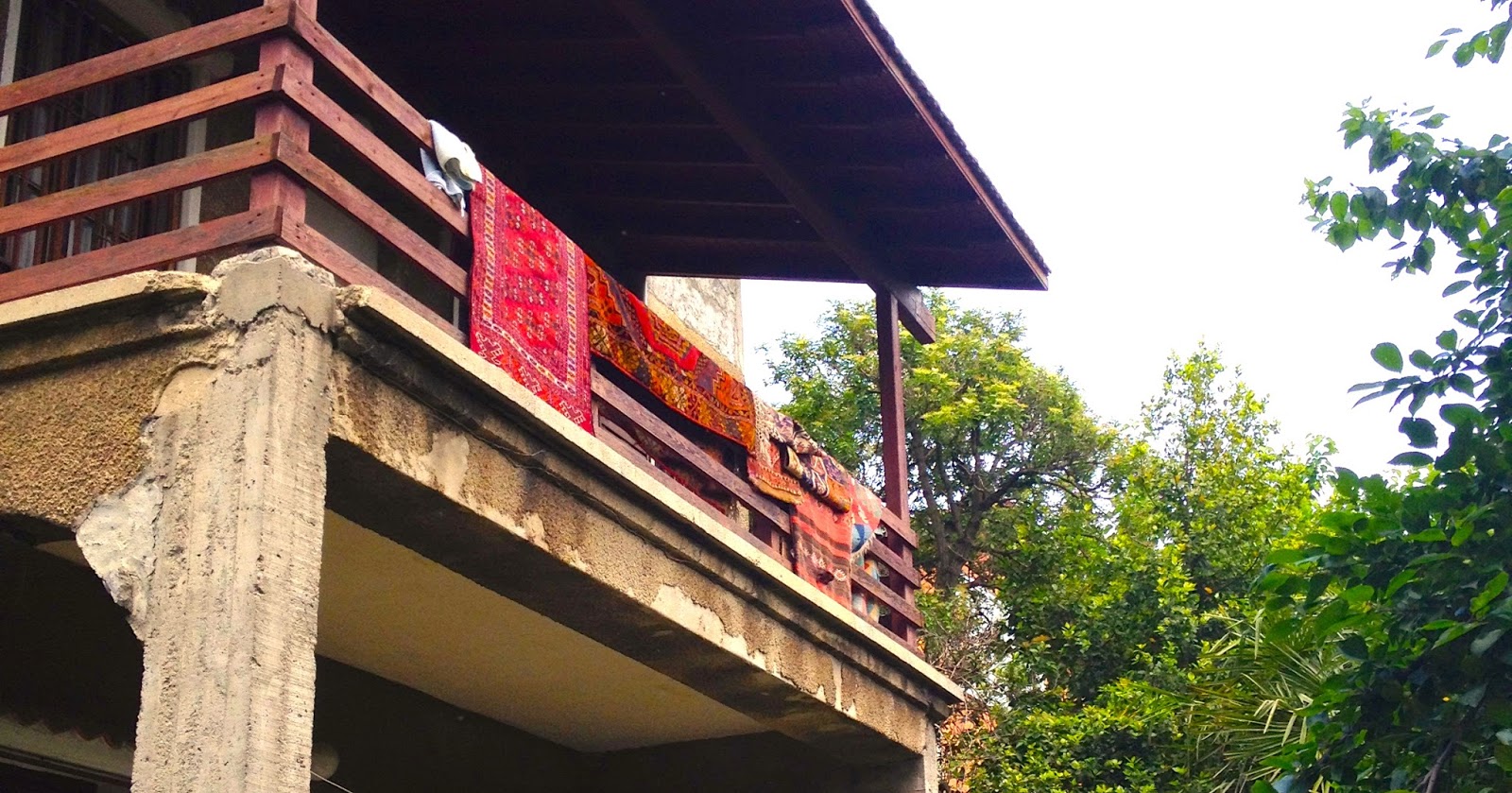 Her mother and aunts’ house is up for sale. It now belongs to her and an aunt, the only one of the three sisters who is still alive. They’re selling because she wants to go back home to Canada after ten years. The aunt has lived abroad most of her adult life.

When a copper coloured cat jumps onto the lap of an economist, she smiles.
“They've had all their shots.” Her eyes shine like coal in her Snow White face. She unwinds a long tight curl with her finger and then lets it spring back. “Know anyone rich people who want to buy property here?”
This ordinary house, built about half a century ago on one of Istanbul's seven hills now fetches a handsome price.
“You should have no problem,” someone says. “Now is a good time to sell.”
“But the cats,” she says. “They’re so happy here.”
“Are they all yours?” I ask.
Only one is. She rescued it when it was little. It’ll come to Canada, and so will her dog.
“What will the others do with me not here? With the house sold?” Her eyes are moist with emotion. “They’re so happy here. We have this little world.”
The economists are silent. Two are petting cats by now. You can see the wheels of their ever practical minds turning. Yes, there are the cats but there is also the handsome price the house will fetch and the future it will give her in Canada. But these loveable furry creatures, these beings that deserve life as much as the next guy. 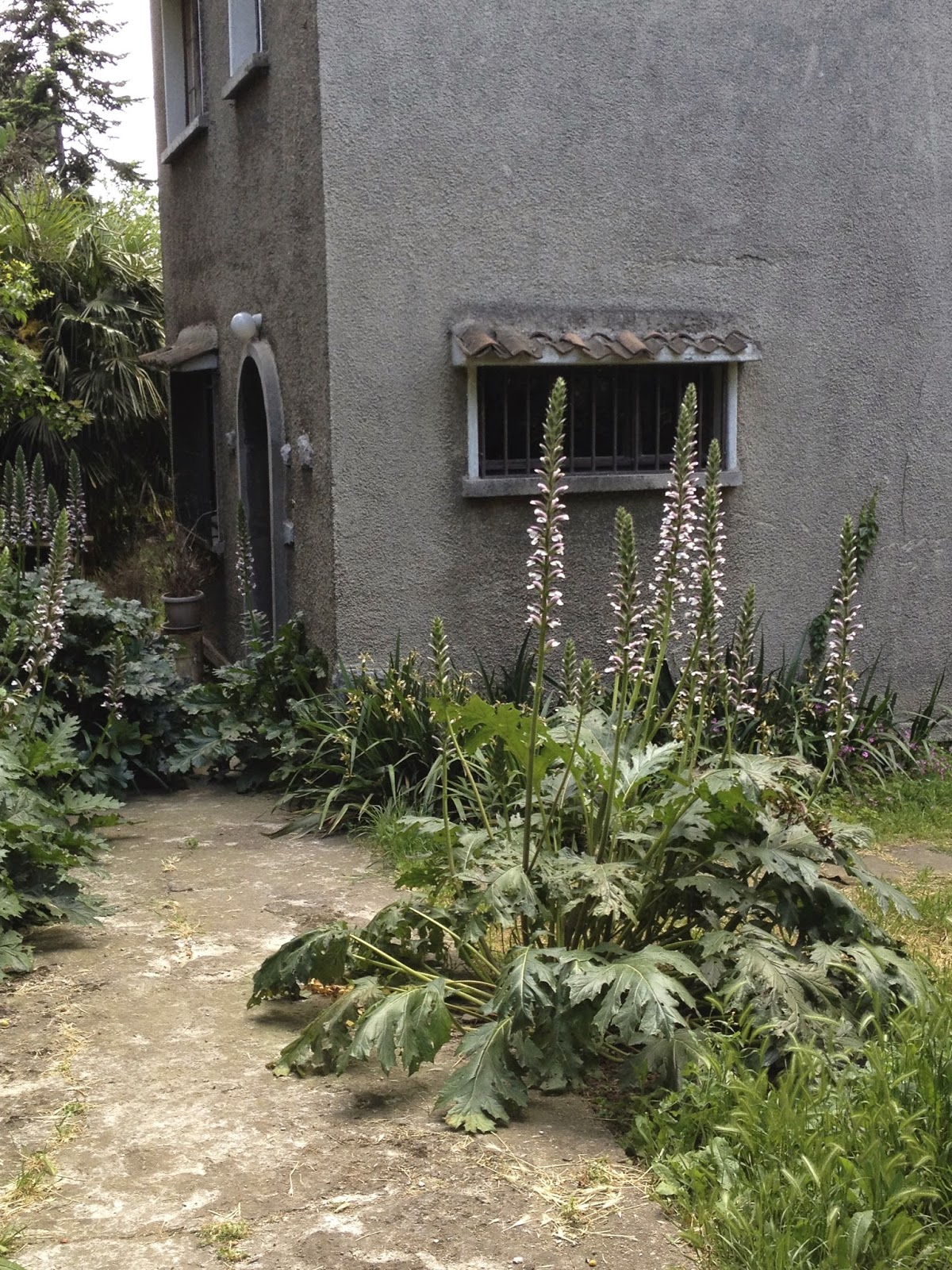 A helicopter flies over. The prime minister is back from his campaign speech in Germany where he rallied people by presenting himself as answer to Europe's problems. He lives a few blocks down the road.
Europe has a problem with minorities. In Brussels four people were shot outside the Jewish museum. Two Israeli visitors, a member of the local Jewish community and a random person. Three died, the other is severely wounded. Overhead, the helicopter chops the air again. On the way here I saw police buses and police with heavy machine guns in the vicinity of the prime minister’s office.
“They come to our door,” she says, “asking all kinds of questions.”
She is referring to the people protecting the PM. I am thinking of the state of the world and the giant machine of progress as I look at this remnant of old world, this untouched house and untouched garden. All around us new houses and low rises show the benefits of progress. Some are almost the size of a palace. In the commercial districts they build temples that reach up to the sky. Istanbul has two Trump Towers. Below them, in places like this garden, people are struggling to hold on. 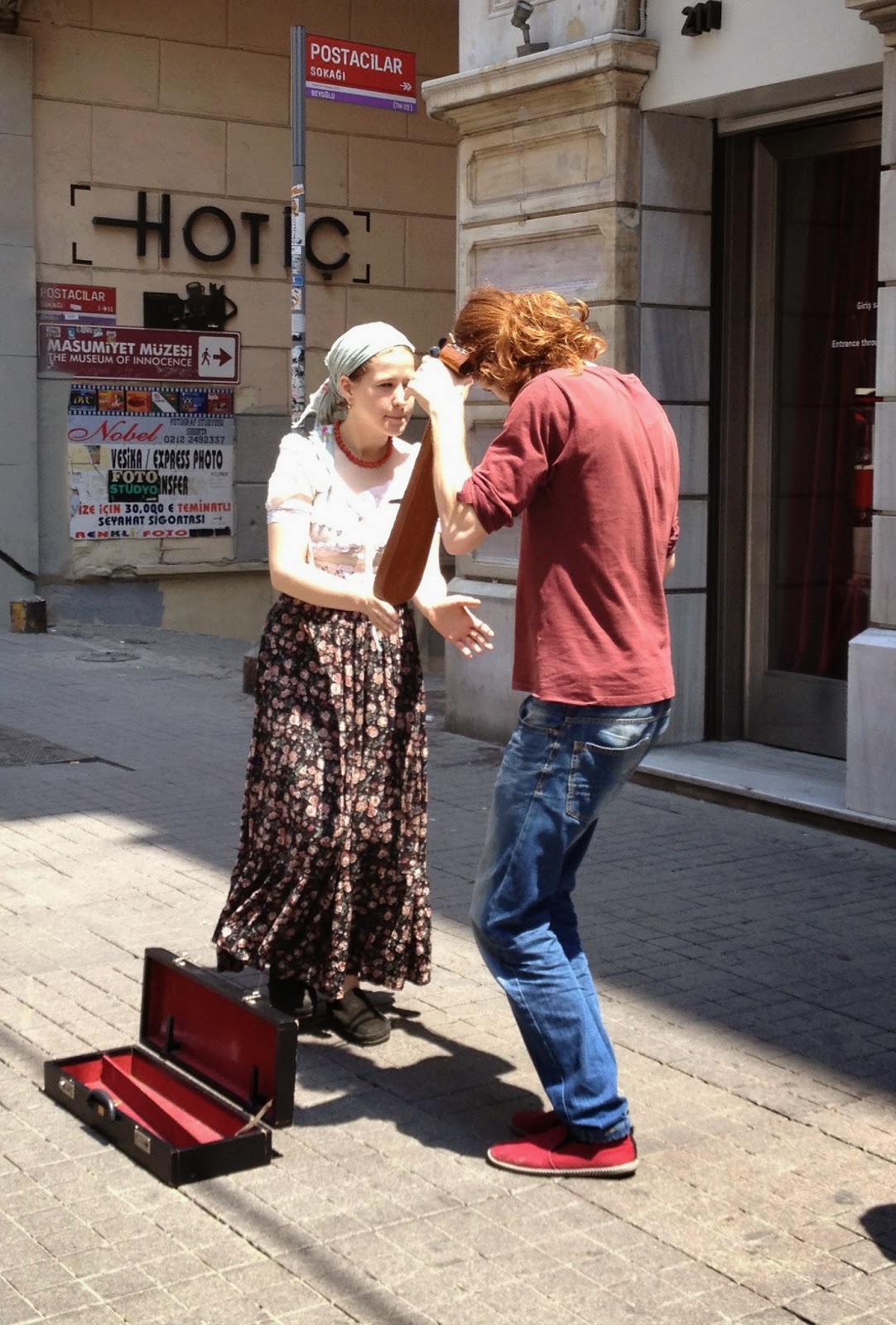 Some are out in the street selling whatever they have. In other places they crawl like ants, carrying little pieces of refuge in the hope of making a buck. In tourist places they come with their hands stretched out for a coin. Outcasts in a turmoil ridden world.

Last Sunday, Th and I walked all the way to the place where the modest Orthodox Patriarch’s Church sits tucked amidst the old streets of Fener. The walk there was long and a bit unsettling. Not because at a few crossroads we had to put our lives on the line as we dodged cars to get to the other side but also, because to get there, we ventured into a neighbourhood where I would not have gone alone. In a little triangle of green a Roma family set up camp. The children were on us like gnats. They see a person who isn’t poor and they stick out their hand. At the Yeni Mosque, near the Spice Market, a boy stuck out his shoe and asked if we could help him buy a new pair; his little sister, or niece, stuck a dirty bare foot from underneath her long pink skirt.
She was in apprenticeship and doing very well. 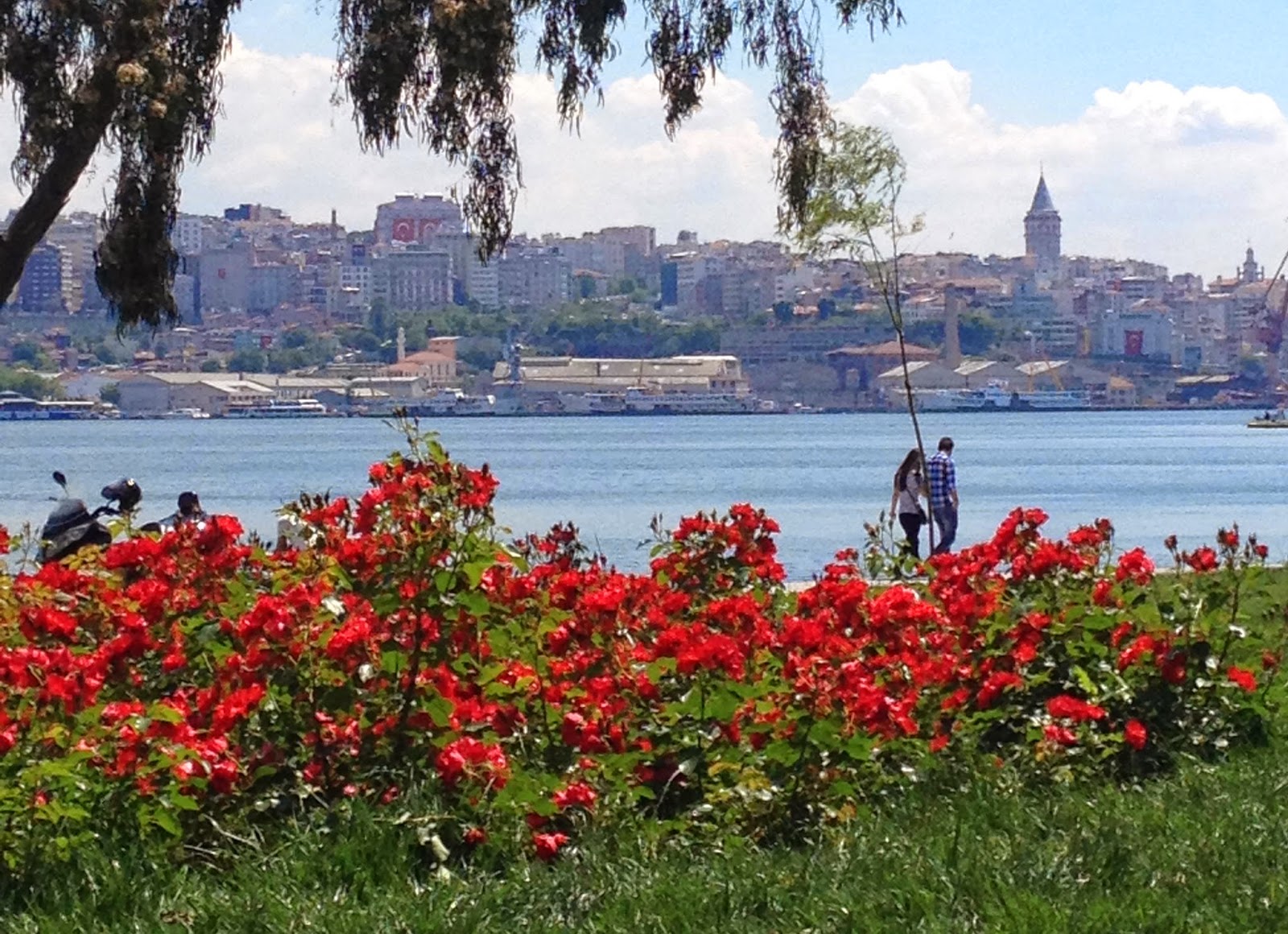 On the way back from Fener we took the more pleasant road next to the Golden Horn. A beautiful park where families bring their children, it  stretches back to the first bridge. A shoeshine man walked by us, his beautiful copper basket over his shoulder reflecting the sun. A brush fell off as he walked by and Th, concerned the man was about to loose an important piece of equipment, picked up the brush and ran after him.
As reward, he was offered a shoeshine and no amount of protesting would deter the man. When I reached into my purse, he held up his hand in protest. Here, clearly, was a man who wanted to do another man a good turn in gratitude. I reached into my purse anyway because the intention had not been to pay him but to take a photograph.
When Th joined me he was steamed. After his sandals were beautifully shined, he offered the man 10 lire, anyhow.
“No,” the good man said. “I want 30 lire.”
Th gave him 15 and left a good man who was not happy.
After we risked our lives again dashing in front of speeding cars to get by the second bridge, another shoeshine man walked by. His brush dropped. Th whistled after him but then stopped himself. We now understood how it works.
In any case, his sandals will be clean until the end of summer. And not a spot of polish on his socks, either. On the way home we stopped for fresh orange juice. We were happy it only cost 1 lira. 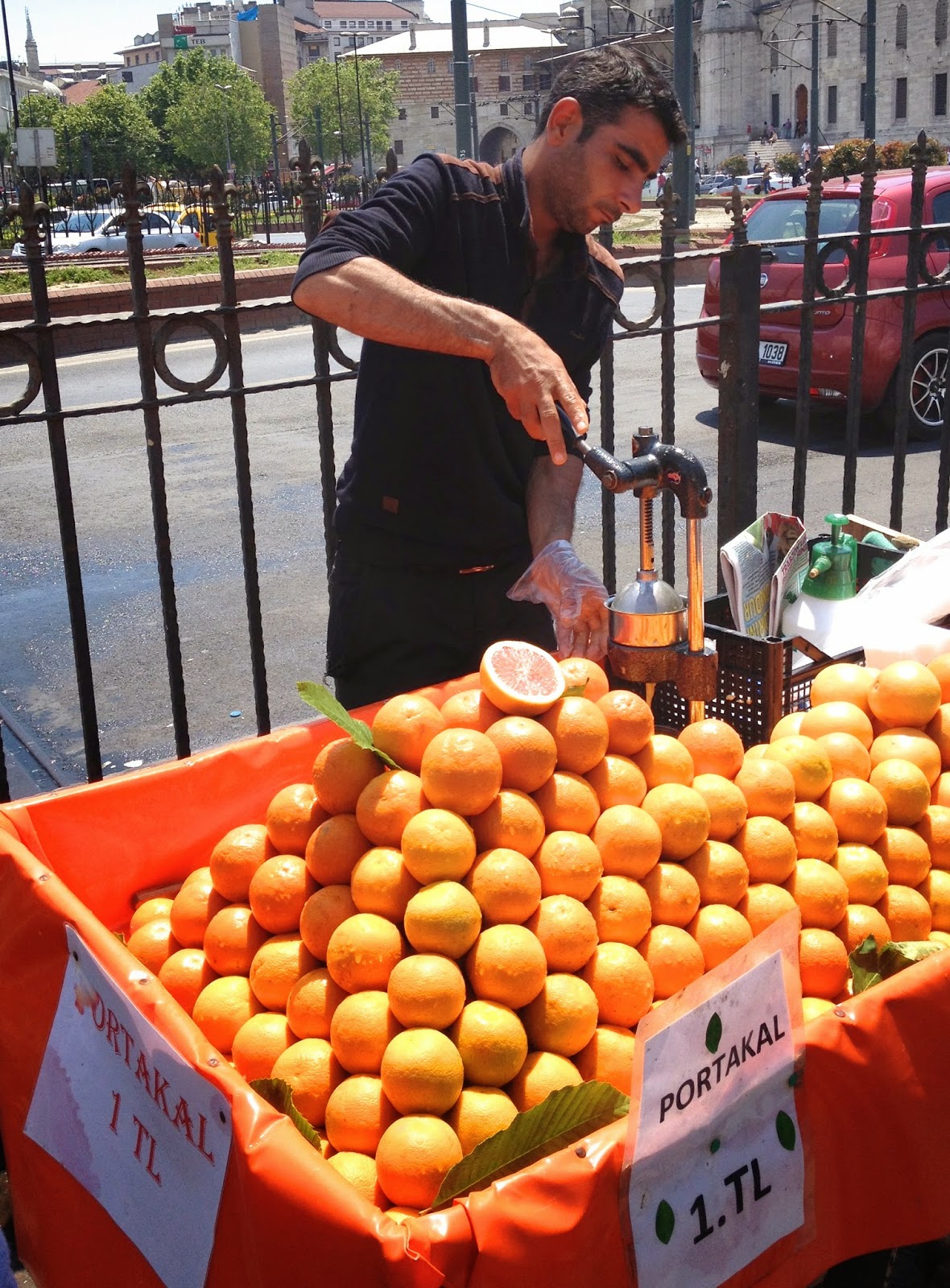 Back in the garden, we now each have a plate with grilled meatballs and lamb chops before us, a bowl of soup made from drained yoghurt, seasoned with dill and pickled cucumber. There are chips and a dip of grilled eggplant, and another one of guacamole. Food travels the world and shows us who was where.
Then comes desert. A pudding made from mastic, other delicacies, and a bowl of cut up fruit. By the time we pick up our Turkish coffee, we are very mellow. 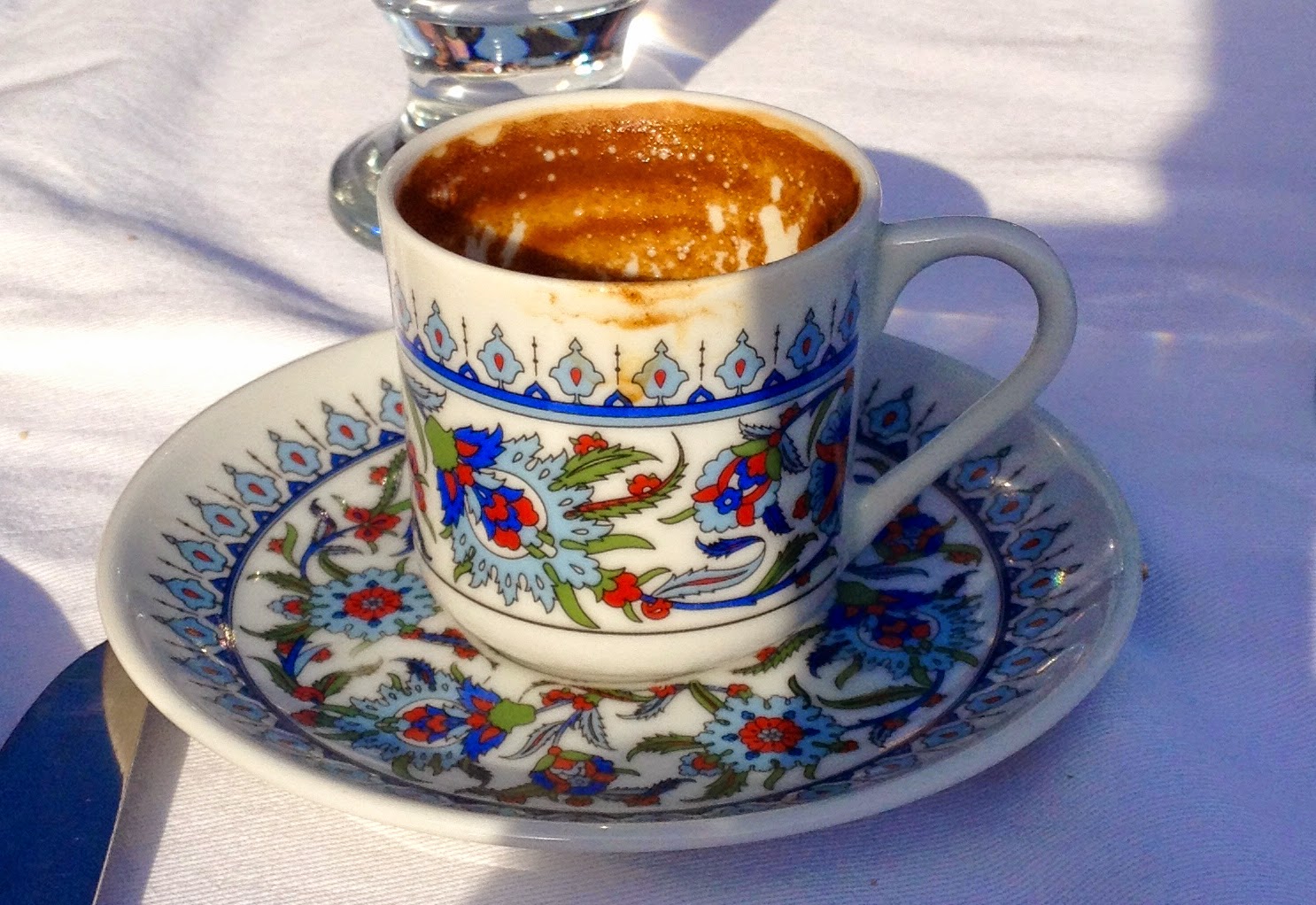 “We should set up a fund and have a cat sanctuary here,” one of the economists proposes.

“It would be a nice statement in a place like this,” another says.
A place like this means a sanctuary that preserves the old in a world where everything is new and where the devil doesn’t only wear Prada.
It’s a big world here. A place full of energy. The city spreads along many shores and straddles two continents. It also straddles a few fault lines.
“Did you feel the earthquake?” someone asked while we were still in the garden.
Th and I hadn’t because we had been out walking but those who were indoors had. The conversation moved on to the rain that fell on our side that morning but not on their side. It came down and ran in a stream by the side of the road.
Istanbul rumbles regularly and it has many mini climates.
When you come to a foreign land, your degree of engagement colours your perceptions. In an email exchange with a friend we talked about this. She had been to Istanbul because of a conference her husband was attending.
“I had a sanitized version of the place,” she wrote. They were wined and dined as they floated on the Bosphorus.
The tourists who just floated in on yet another massive boat, have their own impressions as they look with binoculars from the familiarity of their private balcony, or as they run their daily routine up on deck. No need to ever stop what you love doing and yet you can still see things in person without ever becoming engaged with this world that you pass through.
I look at them and remember when I have travelled that way a few times. Just as the passenger on the ship looking through binoculars has no idea that the boat he is on is stealing the view from a lady who has a yen for contemplating moving waters, I don’t really know much about Cairo. Cairo, where I stepped off a boat for the day, will forever be 36 degrees in my mind and my child will always have chickenpox. Her body hotter than the desert sand, she is forever running to see the camels.


Istanbul has already a few faces for me. It will always have different kinds of weather and it will always have my friend, who can’t wait to get home to Canada, even if it will break her heart when she has to leave the neighbourhood strays behind. 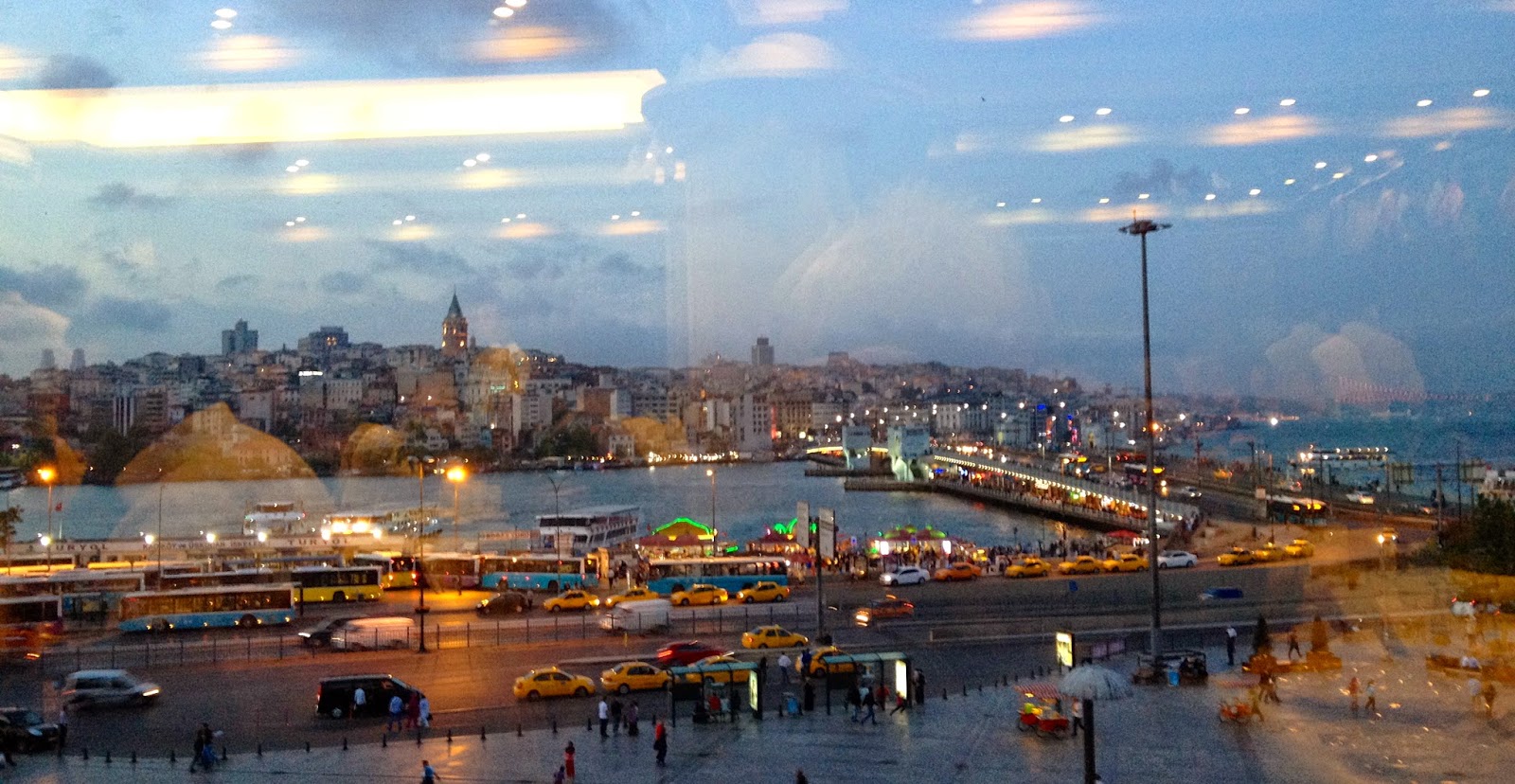