In the past few days I met some of Ale and Emiliano’s manège of animals that take turns living in the city and in their place in Ostia. A couple of cats, and also a baby porcupine in need of rescue. Apparently, baby porcupines can easily die when the nights get too cool and, with the frequent rains, this is exactly the situation right now. The baby hedgehog seems happy enough living in the bidet and eating and pooping to its heart’s content.
Last night, we went for dinner at Anna’s place. Anna is Ale’s mom and she agreed to feed my penchant for the macabre. The English Cemetery where Keats and Shelley found their final resting place will do. I didn’t feel unlike one of the pets when I was handed from the capable hands of Ale to the capable hands of Anna, who is very gracious and speaks impeccable English.
The English Cemetery lies just inside the walls of Ancient Rome, underneath the Pyramid. Besides Keats and Shelley, Gramsci and the son of Goethe are also buried there. And a Marcus Donald Campbell Tate, who at his death in 1956 was a professor of Greek at the University of Toronto. Why he was buried here was not clear but a certain connection is assumed, or an undying love for the Eternal City. 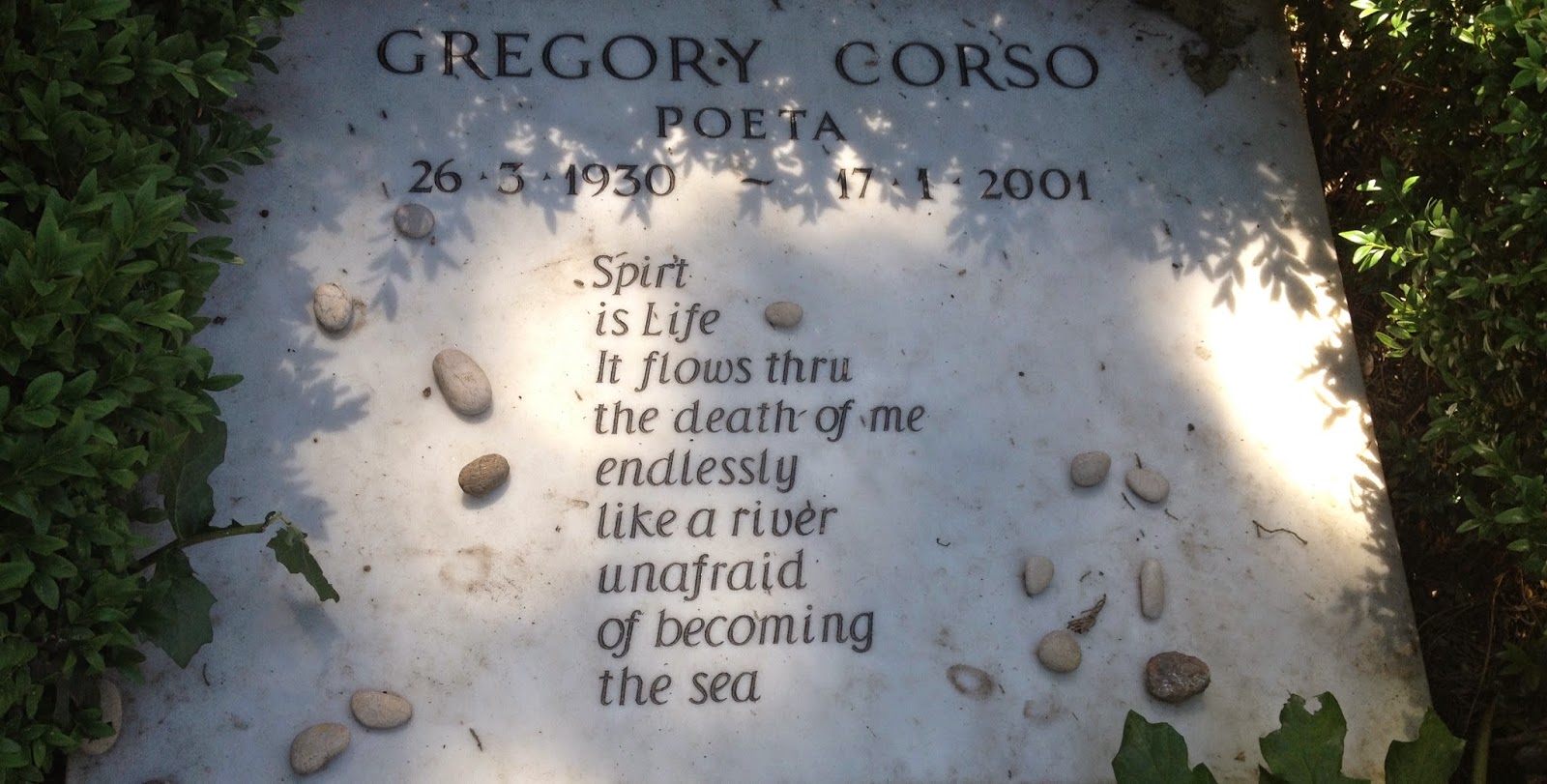 The same is true for Gregory Corso, a beat poet I didn’t know about until after I stood at his grave that was covered with small stones. Whether put there by human hand or the weather was not clear but what was clear was that I would never have stopped if it weren’t for those stones.
And now that I have discovered him, I am not sure what I will do with him. This is telling of how I feel much of the time, discovering Rome.
Once we got on the road, Anna slotted her car into the endless stream of determined drivers, who go about the task with an expression that says, don’t mess with me but if you do, we’ll handle it with grace. At some point in my travels with Anna, a car grazed hers and likely put another dent in her much abused vehicle. The driver stopped and came to talk to her to make sure she was alright, that her car was alright, that she was alright with this too close an encounter. In the end, they looked from the side of her car to one another and shrugged before they each crawled back in their own vehicle.
Soon we were part again of the traffic that moves like slow lava down a mountainside.
Rome’s drivers are aggressive and resigned all at once. Car horns blare but most drivers don’t get hot and bothered. There is no point. Few cars have no dents or scratches, passing happens with only centimetres to spare, and parking is an art Anna has mastered after living for years in one of the suburbs that surround the city.
“This is an old city.” Anna said.
While manoeuvring through traffic, she had the presence of mind to point to a cluster of houses that used to have gardens that spilled over the walls of the Tiber. The gardens gone, we were driving over the pavement that replaced them.
Italians are loathe to destroy old buildings. There was a time in the nineteen seventies when they joined the rest of the world in breaking the old and bringing in the new. But it was an aberration, I think. On the whole, Italians seem to prefer to preserve and modify. Old Roman ruins became churches, homes were tacked onto them, cemeteries built into them. All this leaves me with a sense as if I can see the endless stream of civilization at is flows through and erodes and modifies. It is an exhilarating thing yet a bit sad at the same time. Much like the angel on one of the graves at the English Cemetery. She doesn’t so much drape itself over the tomb as she wants to crawl over it. Arms heavy, head down as if she has succumbed to the weight of her wings, her toes show a promise of energy that she will succeed to lift this soul to heaven. 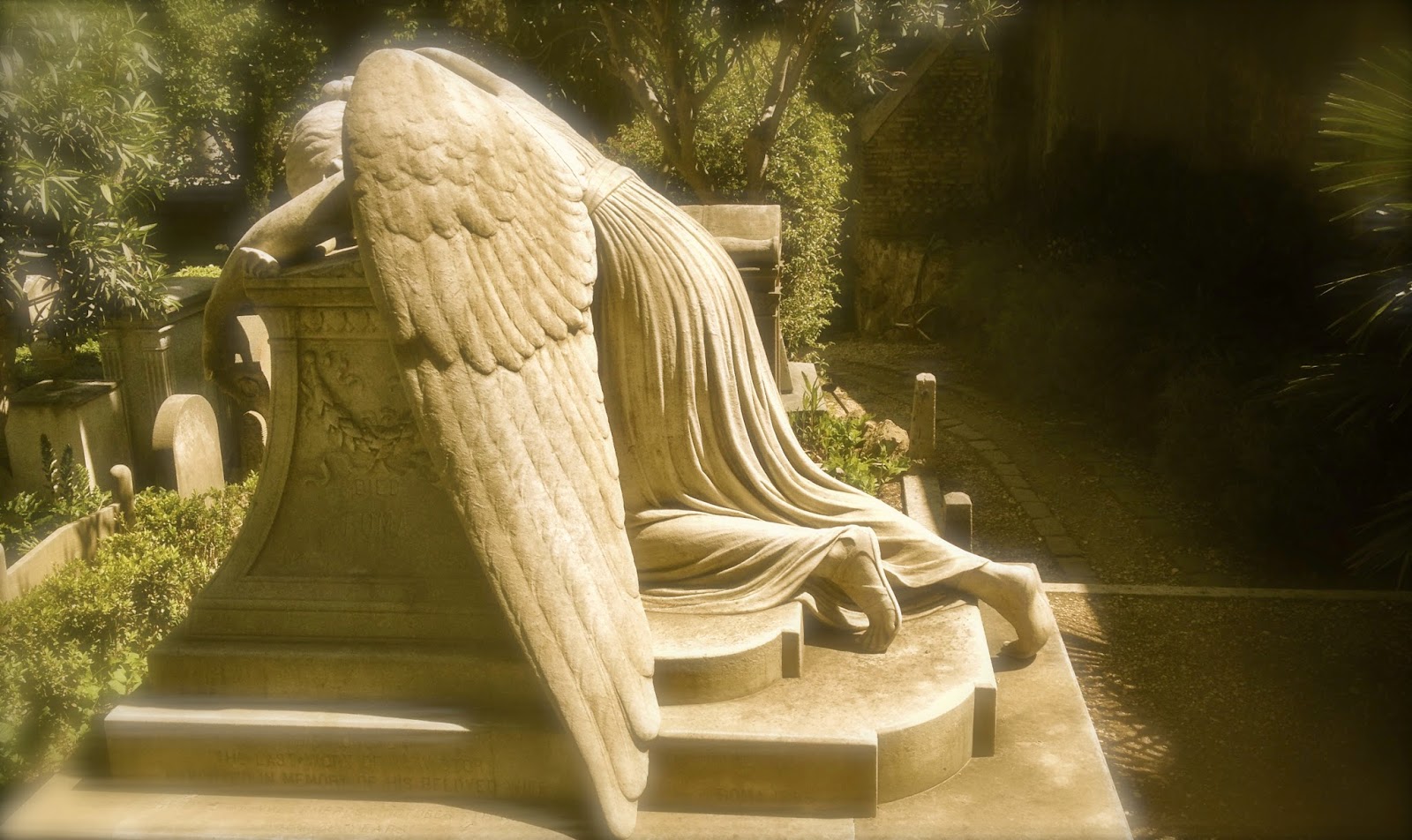 When Anna took me out again a few days later, I had seen heaven and now she was bringing me back down to earth. The day before had started early for me as I wanted to get to St Peter’s Square with time to spare before the Pope made his appearance.

Every Wednesday, at 10 o’clock, Pope Francis comes out and greets the faithful, who were already filling up the square by the time I got there. If I had wanted to be close to the action, I should have ordered a free ticket and I too would have been allowed inside the barricade where security people were checking people’s bags.

I stationed myself at that checkpoint so I had the benefit of resting my arms on the barricade and still have free space in front of me so I could see most of the square, including the platform for the pope. On either side of the platform giant TV screens showed him making his way through the crowd. He was wheeled around in his pope-mobile to the tunes of a jaunty march blaring from the speakers. Spurred on by this music, the security guards soon abandoned all pretext at checking bags and just ushered the faithful inside the barricades.
By now a foxtrot was playing. Then there was a kind of ripple that was followed by the appearance of the pope-mobile in our vicinity.
He looks a happy man, Pope Francis. He has a kind and seemingly genuine smile. A security guard thrust a baby at him. After he kissed the round little head, he passed the baby back. The blessed little bundle was given from hand to hand until it landed safely back the arms of its father.
The pope disappeared from view but, to the tune of Bridge over the River Kwai, he was wheeled back our way again. This time he came so close I could see the creases that ran from his chin to his cheeks. This happy smiling man, all dressed in white, clearly felt at home where he was.
The next day I was standing next to Anna, in front of a series of paintings depicting the progress Mussolini brought to Italy. 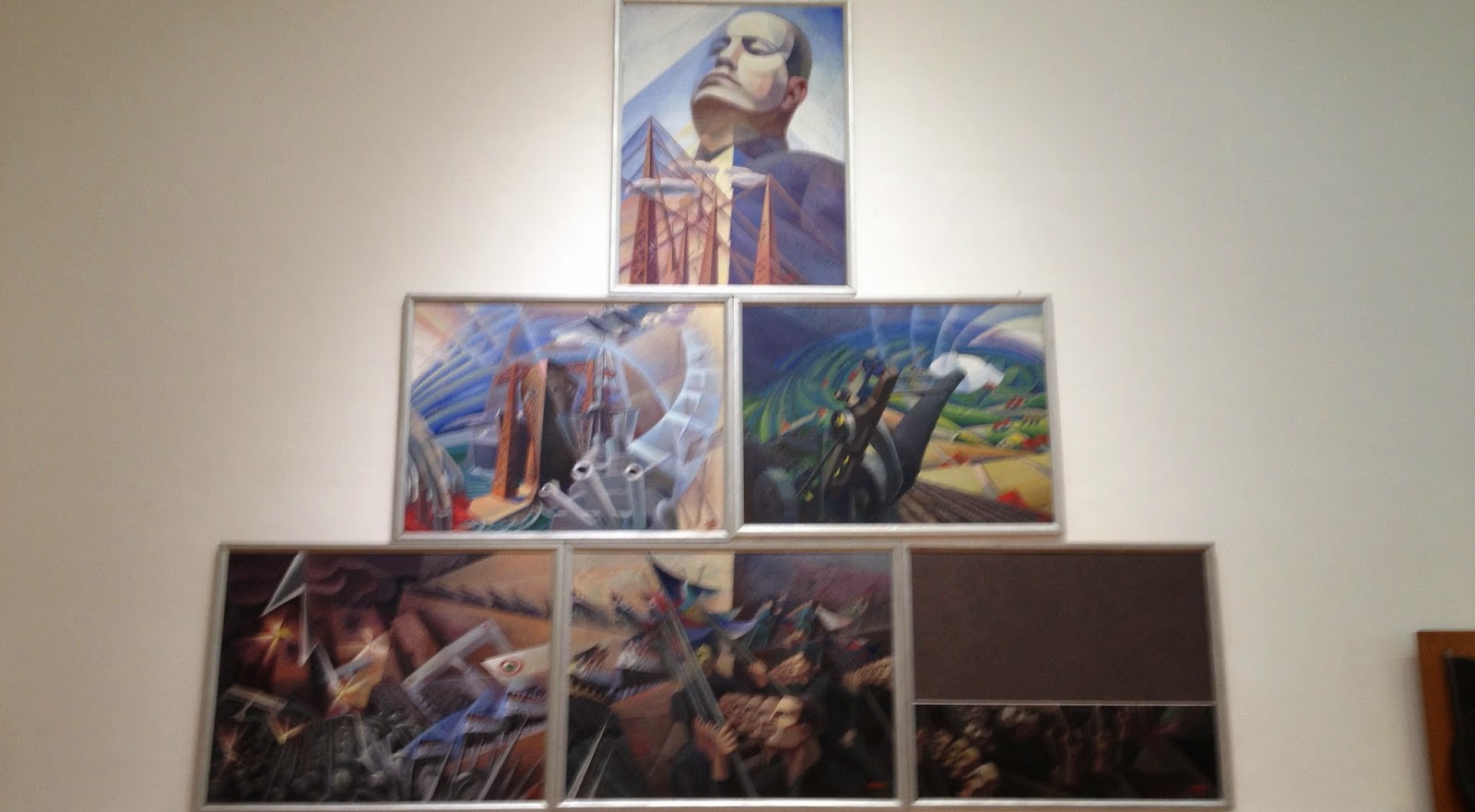 Mussolini strikes an earnest pose at the top of a triangle of paintings. Looking at his face, I thought back of the happy face of the current pope. From Il Duce to Il Papa. We always want leaders that move us forward but today we want them approachable and on our level.

The National Gallery of Modern Art is a light and airy building. All white inside and out, and with a glass floor in the spacious main lobby. In the middle of this lobby a group of delicate statues, knee-high and white, adds to the airiness of the place. I felt as if I were skating on ice as I crossed this floor of cracked glass. It wasn’t until I stood before the triangle of Mussolini paintings that I glimpsed the dark soul of this country, a soul that keeps the airiness afloat. 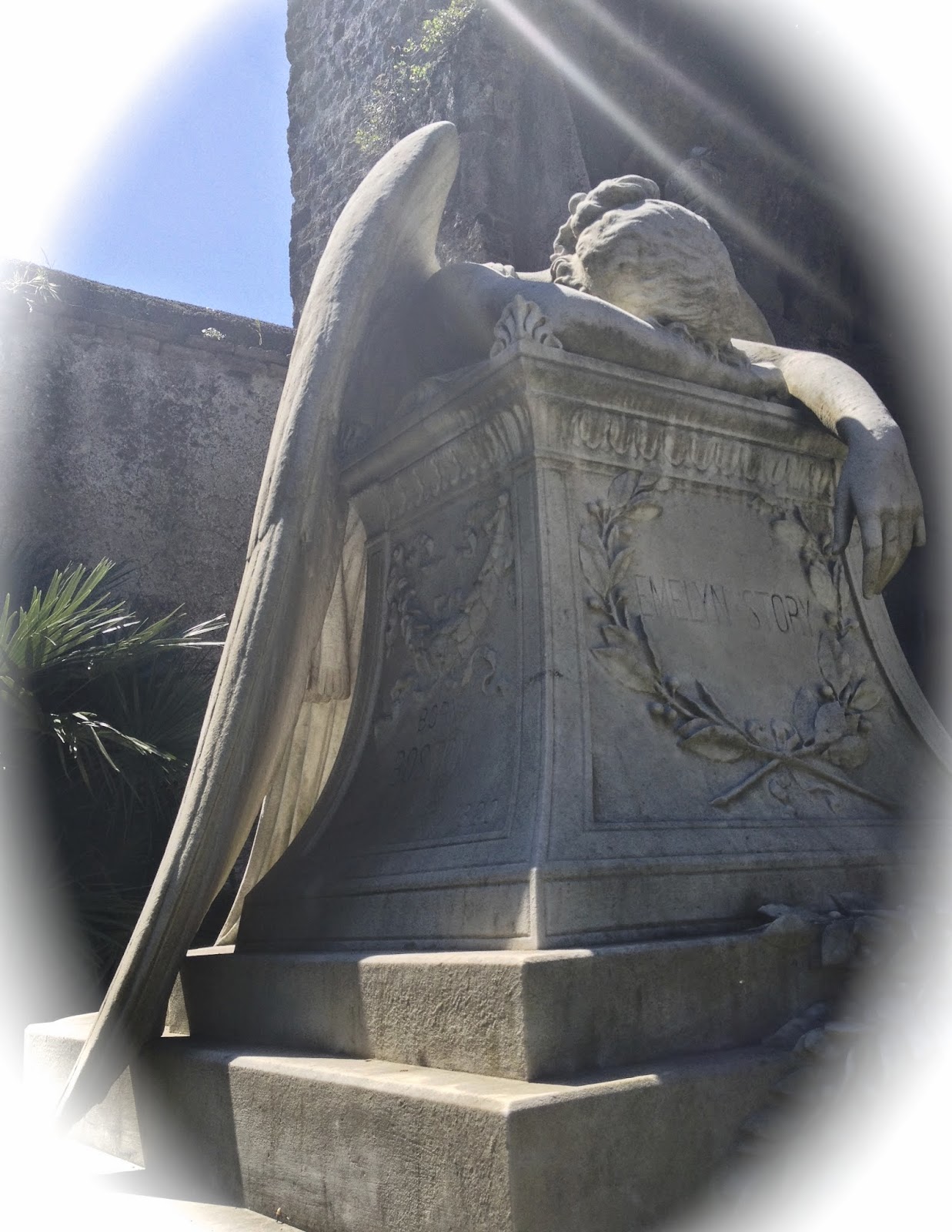 “They say we needed him in the beginning,” Anna said. “We were a dreadfully unorganized mess. It's believed he set us on the right path.”
A path that went too deep into darkness but, like the angel on the tomb at the English Cemetery, Italy pushed herself up by her toes.